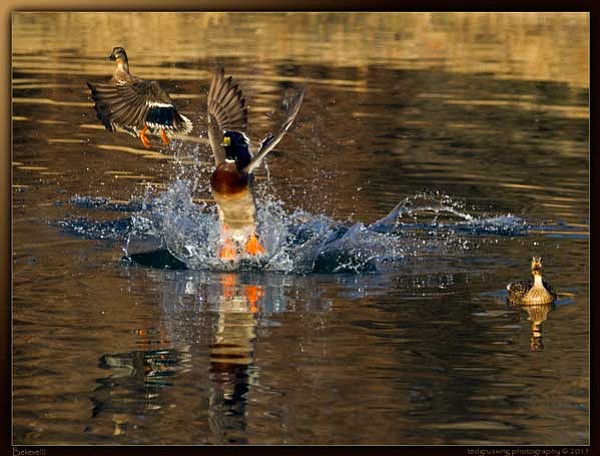 ... that you can do it ... this is the key to nearly everything ... then comes the doing. I joined a couple of friends at the ponds this afternoon and like many days where you hope for the great, you do not know whether it will happen. You train, study, practice and work to perfect your art and skills so that if the moment occurs, you can take advantage of it. Today presented many fine opportunities and I got some of the finest wildlife photos I have ever captured. The photo tonight I titled "Believe!!!" because it seemed to me that this greenhead mallard was almost on a podium expressing his belief that he could fly. His wings are extended upwards preparing for the second powerful beat which would carry him up about four feet before he began the transition to normal flight. You can see his webbed feet as they have finished providing additional thrust to break the connection with the water and the divots in the water where his wing tips had powerfully slapped down to provide the initial thrust are very evident. I got five shots of the first second of flight and one shot into the 2nd second of flight.

I like the expression on the hen mallard too as she looks back towards the drake and she was about a quarter of a second ahead of him into flight and another hen mallard seems to be quietly enjoying the afternoon, but a fraction of a second later she too entered flight. And I got the reflections of all three of them. Huge smiles on my end and my good friend Doug expressed his pleasure with the shots in his own, now patented, unique manner. I know I have a good shot when I hear Doug's approval :-)

The rest of the shoot there was very good too with some of my first shots of a Kingfisher as well as other wildlife. I think if I had to choose only one area of photography to spend my life in, it would be wildlife. Mercifully I am not limited and can do my flowers, aerial and other shots; nothing else comes close to the excitement of freezing powerful live action in a single frame though.

It's Friday and we're into the weekend. We hope that you will have a wonderful weekend and find continuing joy in your life. Back on Monday ... be safe, be well, and be the best you can be.

grace
Close
going vertical
The rest of the story
Got it!