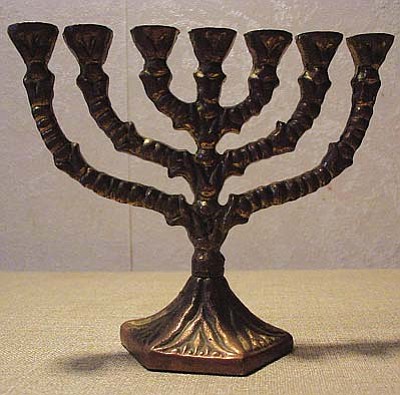 Friday is the fourth night of Hannukkah.

Shalom. The Jewish Community of Sedona and the Verde Valley invites everyone to Erev Shabbat services, Friday evening, Dec. 23, 2011, at 7:30 p.m. led by Rabbi Alicia Magal. The service will begin with lighting the Hanukkah candles for the fourth night of Hanukkah before beginning our Shabbat service. This is also Simcha Shabbat, when those who celebrate a birthday, anniversary or other simcha (happy occasion) receive a special blessing.

Saturday morning, Dec. 24 at 11 a.m., all are invited to Torah study, which is divided into a two topics of discussion: first, a short presentation of the portion of the week: Miketz, Genesis 41:1-44:17, showing Joseph as a much more mature man, who becomes Pharaoh’s valued adviser. During a famine, his brothers, who had sold him into slavery when he was a youth, now come seeking food, but do not recognize him as a high official in the Egyptian palace. Joseph tests them to see if they have repented for their wrongdoing. The second focus of study will be on the Book of Judges, as the Israelites entered into the Promised Land. This week’s study will focus on the battles fought by Gideon in the Land of Israel. To demonstrate his faith in God’s power, he actually reduced the size of his army! Potluck dairy/vegetarian luncheon follows the study session.

Sunday, Dec. 25, 9-11 a.m. community open house breakfast, prepared and served by synagogue members for our neighbors and anyone who would like companionship and a meal on Christmas morning.

The JCSVV is a welcoming, egalitarian congregation, unaffiliated with a particular stream of Judaism. The synagogue is located at 100 Meadowlark Drive, off State Route 179 just south of the Chapel Road roundabout. Call (928) 204-1286 or visit www.jcsvv.org.