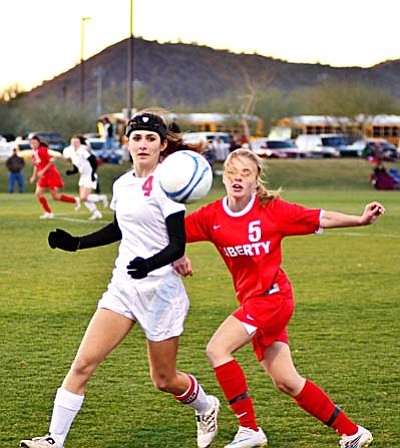 <b>Torey Braly</b> looks to control a bouncing ball against Liberty Tuesday at the Reach 11 Sports Complex in Phoenix. VVN/Sean Morris

PHOENIX-Torey Braly scored a hat trick and the Mingus girls soccer team shutout Liberty 3-0 Tuesday evening at the Reach 11 Sports Complex in the first round of the state playoffs.

It was a cold and windy. To start the Marauders had trouble playing against the wind. The score was 1-0 at halftime.

Mingus knew they could play better and in the second half they did. The ball was played primarily on Liberty's half and Mingus created a lot more opportunities to score.

Mingus moved the ball with great teamwork, but also some great individual play. Notably all of Braly's goals were unassisted. She's so fast and has such great ball control Liberty didn't have much of a chance to stop her. Not that many teams do.

Delaney Scanlan and MacKenzie Mabery also made nice runs with the ball at their feet. Both play defensive positions, but they have the ability to push the ball up the field and can manufacture successful offensive attacks.

Braly was the only player to score, but other Mingus girls were very close. The game was a tale of two halves, but the end result was expected.

"We had to figure out the wind," said Mabery. "It was just a matter of showing feet and talking."

Showing feet means moving without the ball and getting open for a pass on the ground. That's something the team has done well all year, they just had to remember that in the second half.

"We wanted to show who we are because a 1-0 game against this team wouldn't show what we're capable of," said Braly. "We had to pull it together and show the tournament that we're worth it and not to underestimate us."

The girls next game is again at the Reach 11 Sports Complex Saturday at 2 p.m. against 11-seed Higley.