Old Town Mission thanks its volunteers
Vols put in about 40,000 hours each year 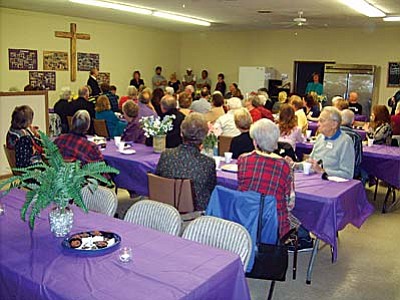 About 75 volunteers for the Old Town Mission in Cottonwood were treated Friday night to a Volunteer Appreciation Night. The mission has about 400 volunteers who help provide all of its services to the community.

COTTONWOOD - "It's an army of volunteers," said Rebecca Walker, Compassion Services manager for the Old Town Mission in Cottonwood. She was talking about the nearly 400 volunteers who help run the mission and its thrift store. "We could not do it without them."

That thankful sentiment was behind the Volunteer Appreciation Night the mission held for its volunteers last Friday.

"We do it every year," Walker said. "They put in so many hours and do it with such graciousness."

In 2010, the mission served on average more than 50 families each day, with a record of 90 families in a single day. In addition, nearly 15,000 lunches were served during the mission's daily lunch program.

"We like to find special ways to say thank you," Walker said about the volunteers.

The Volunteer Appreciation Night is a big part of that thank you.

Volunteers are awarded pins based on the number of hours put in each year by the individual volunteers.

The Appreciation Night celebration included a snack-food buffet and the award ceremony. Walker said one of the best things about the annual appreciation night is that the volunteers get to meet each other.

She said there are so many volunteers that many of them don't know each other.

Out of the 400 volunteers, about 75 were able to attend the event.