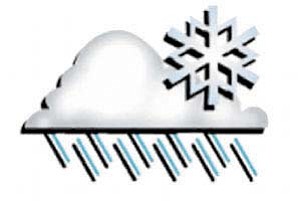 NORTHERN ARIZONA -- With a forecast of heavy snow falling in the high country this weekend, drivers are advised to be prepared in case closures of Interstates 17 and 40 are necessary due to safety concerns.

The National Weather Service has advised ADOT that heavy snow can be expected between midday Saturday and Sunday as a winter storm crosses Arizona.

ADOT and the Arizona Department of Public Safety anticipate closures of I-17 and I-40 if heavy snow creates conditions that are deemed hazardous. Snow also is forecast at lower elevations, which could affect other highways in areas such as the Verde Valley, Prescott and Gila County.

Last weekend's storm forced closures of northbound Interstate-17 between the State Route 179 interchange and Flagstaff after several incidents, including vehicles sliding off the highway.

A stretch of eastbound Interstate 40 also was closed between Kingman and Ash Fork during the storm due to a fatal crash involving two commercial trucks. In addition, SR 89A between Flagstaff and Sedona and US 180 northwest of Flagstaff were closed due to heavy and drifting snow.

ADOT snowplow operators in the Flagstaff region will be prepared to work 12-hour shifts while clearing snow and ice from state highways.

ADOT's first priority is to keep Interstates 17 and 40 open to traffic. If blowing and drifting snow become severe and conditions are deemed too slippery, those busier routes can be closed.

Drivers who travel in winter conditions are urged to reduce speeds and give themselves extra distance when following other vehicles.

For the Yavapai County Valleys and Basins:

A winter storm warning remains in effect from 5 p.m. Saturday until 5 p.m. Sunday for elevations above 4000 feet.

A winter weather advisory remains in effect from 11 p.m. Saturday to 5 p.m. Sunday for elevations below 4000 feet.

TIMING: Snow will begin over the higher elevations Saturday, increasing in coverage and intensity overnight. Rain will turn to snow over the lower elevations. Snow showers will continue through the day Sunday ending by late afternoon.

SNOW LEVELS will lower from 5000 to 4000 feet Saturday evening to around 2500 feet Sunday morning.