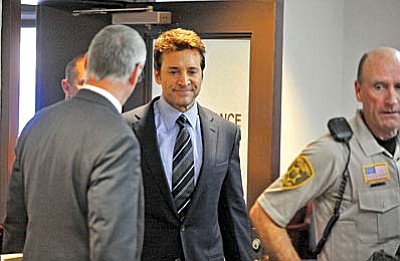 Ray, 53, who once ascended to the pinnacle of the self-help industry, faces charges in the deaths of Kirby Brown, James Shore and Liz Neuman, who succumbed to trauma they suffered during a sweat lodge ceremony Ray led at Angel Valley Retreat near Sedona on Oct. 8, 2009.

Ray has pleaded not guilty to the charges and is free on bond.

On Friday, Yavapai County Superior Court Judge Warren Darrow's patient and meticulous jury selection process paid off as attorneys for the state and the defense agreed on an 18-member jury after weeks of study and six days of intense questioning.

The final juror strikes actually took place after the last 30 finalists had gone home for the day. Those who made the final panel will be made aware of their selection by Monday, with opening statements to take place Tuesday.

The success of the process puts to rest the question of a change of venue. Ray's attorneys, led by Prescott's Tom Kelly and Luis Li of Los Angeles, had told the court in two prior motions that they had severe doubts about the likelihood of seating an unbiased panel in Yavapai County.

"Yes, we're satisfied and we're ready to try the case," Kelly said. "I think Judge Darrow was extremely cautious and considerate in making sure that both sides' concerns were met."

Topics ranged from jurors' interest in New Age ideologies to the book and movie "The Secret" to the concept of extreme sports and pushing personal barriers.

"Does anybody think there's anything wrong with pushing themselves?" Li asked, alluding to the state's anticipated notion that Ray, because he had the confidence of the attendees at his "Spiritual Warrior" retreat, was responsible for the alleged victims' decision to stay in the sweat lodge when common sense may have told them to leave.

During a break in the jury selection endeavor, Darrow heard from attorneys for various media outlets including In Session (successor to Court TV), which plans to broadcast the entire trial.

Polk renewed her objection to the live broadcast, contending the possibility existed that upcoming witnesses would watch and perhaps change their testimony based on what they saw.

Attorney David Bodney, speaking for the media, discounted that notion, insisting that "the public has a substantial right to know about the activities here."

Tuesday's schedule calls for a final bit of evidentiary housekeeping in advance of opening statements from both sides, followed by perhaps two prosecution witnesses.

The trial will feature about 50 witnesses and hundreds of pieces of evidence during its anticipated four-month length.