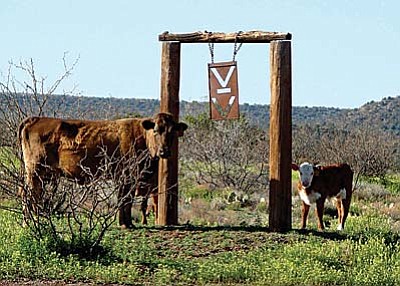 The V Bar V Ranch is a model Arizona Agricultural Experiment Station. It runs from Camp Verde 30 miles east, and is between 4 and 5 miles in width.

When I first heard about V Bar V, it was in conjunction with the petroglyphs located just north of the ranch. The V Bar B was simply the name for this remnant of prehistory. Who knew that a fascinating succession of owners made the history of the ranch itself just as interesting as the ancient site? Dr. David Schafer of the University of Arizona provided the enlightenment.

The land that would become the V Bar V was originally settled by Benjamin Franklin Taylor at the turn of the 20th century. His cattle were branded with the "100" brand and the land became known as the 100 Place.

He moved to another area, and in 1915 William Dickinson patented the holding which included 102.5 acres. Two years later it was purchased by two other Dickinsons and David Babbitt. In 1920, those partners sold the ranch (along with another 40 acres) to A.G. Dickinson.

It was not until 1927 that the V Bar V Cattle Company actually came into existence an entity. The 100 Place and a number of small holdings were bought and consolidated by the partnership of Ida May Swift Minotto, Whitey Montgomery, and Omer Maxwell. Ida May was a granddaughter of Gustavus Swift, of the Swift meat packing business ... and her husband was a Count.

The holding was now known as the V Bar V Ranch, with the right to use that brand. In 1933, the ranch was sold to Marcus J. Lawrence, an eastern playboy who made his mark in the Verde Valley. Lawrence was a womanizer, a boozer, and eventually a homicide victim.

The Verde Valley Medical Center in Cottonwood was originally funded by his mother as a memorial to him, the Marcus J. Lawrence Memorial Hospital. When Lawrence was murdered in 1938 by a jealous husband, the ranch became the property of his partner Bruce Brockett.

Brockett entertained many of the movers and shakers in Arizona-including Barry Goldwater-until his death in 1971.

The ranch then passed through a number of hands until it was sold to Ben Zink in 1985. In 1995 he traded the original 100 Place headquarters to the U.S. Forest Service and the rest of the V Bar V Ranch and brand to the University of Arizona through a gift/purchase arrangement.

Today the ranch is a model Arizona Agricultural Experiment Station. It runs from Camp Verde 30 miles east, and is between 4 and 5 miles in width.

It covers 71,000 acres, 44 of which are private land, and the remainder is Forest Service land. It is a working cattle ranch (550 head), as well as an educational and demonstration facility.

Their programs focus on environmental, wildlife and domestic livestock in Arizona and the Southwest. A fascinating place, and to me, even more interesting than petroglyphs.

Many thanks to Dr. David Schafer, Debra Pearson, and the University of Arizona