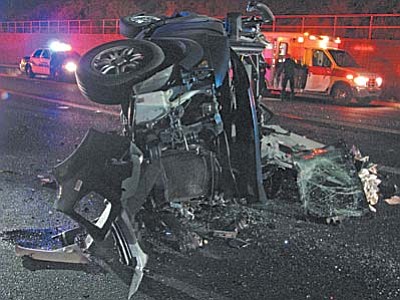 COTTONWOOD - Traffic on State Route 260 through the Verde Villages was blocked for several hours Wednesday night while emergency crews worked to clear a four-vehicle accident, just north of Del Rio Drive. By all accounts, it is remarkable that no one was killed in the collision.

Fire crews from two departments and police from four agencies converged on the wreck about 5:30 p.m.

Three helicopters used the highway to load patients for trauma hospitals in Flagstaff and Phoenix.

The first units were dispatched to an "injury accident involving three vehicles," but Capt. Joel Rosenberg of Verde Valley Fire found four vehicles with major damage, one on its side. The drivers of the three vehicles - a white van, a Honda SUV and a Ford pickup - had serious injuries.

Two occupants were trapped in their wreckage and needed to be extracted. The extraction from the SUV took 45 minutes.

Helicopters were called-in due to the severity and level of injuries within the first hour. Verde Valley Ambulance also assisted with patients. DPS, Yavapai County Sheriff's Office, and the Clarkdale and Cottonwood police departments were all on hand assisting with traffic and investigation of the scene.

Two patients, Dennis Lingle and Carol Birka, were transported to Flagstaff Medical Center and were reported to be in critical condition. The third driver, Cheryl Miskiel was flown to John C. Lincoln in Phoenix for treatment and later released. The fourth vehicle with two occupants sustained minor damage, but no injuries.

Emergency responders say it was unclear how the accident occurred.

Crews remained on scene to assist DPS with traffic control and lighting until the road was re-opened at 9:30, four hours after the accident.

Meanwhile, shortly after 6 p.m., a second Verde Village accident was reported at Western and SR 260, so crews from Cottonwood Fire and Verde Valley Ambulance were diverted to that scene, where two more patients were taken to the hospital.

SR 89A crash results in injuries, traffic delays
Emergency crews respond to a trio of rollover accidents
Crews dispatched to multiple accidents
10 patients assessed after I-17 wrecks
CCFMA responds to vehicle that fell 75-feet down embankment