Finding certainty: SRP see partnerships as opportunity for all 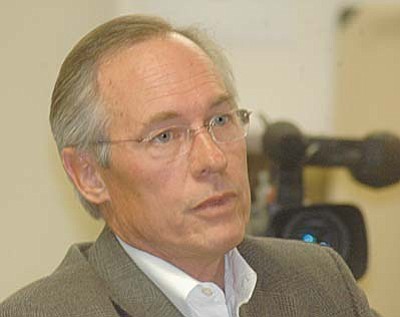 As the manager of Salt River Project’s Water Resource Management division, Dave Roberts sees the current cooperation between valley ditch companies and SRP as an opportunity for additional cooperative projects and to provide certainty for all surface water users on the watershed.

CAMP VERDE - Salt River Project's initiation of the statewide surface water rights adjudication was based on one concept - certainty.

It is still their mantra, and according to Dave Roberts, manager of Water Resource Management for SRP, it will remain so as they continue their effort to engage the owners of lands serviced by irrigation ditches in the Verde Valley

"We brought the adjudication to the court to get everyone's water right determined, so that we and everyone else could plan for the future, in terms of water resource management." Roberts said.

It is that continued lack of certainty, as well as the sluggish pace of the court proceedings, that has initiated SRP's recent efforts to meet one-on-one with the local ditch companies.

As for establishing a legal right for any of the claims, Roberts said there is no process to do that at this time.

"We don't have a process to bring non-Indian water settlements to the court for approval, like we have for the Indian tribes. So one of the things we are thinking about is a way to figure out how the court can be more receptive to these settlements," he said.

"We think it would help spur the adjudication along by encouraging parties to come together and try and resolve the differences out side of litigation. The Eureka Ditch could very well be a candidate for an early settlement if a process could be established."

Roberts said it is SRP's desire to also help sort out water rights so they are attached to any land taking surface water.

"We would be more than willing to help resolve discrepancies by matching up water rights that aren't being used and align them with folks who don't have a right but are using water.

"It is certainly a role we would be more than willing to help out with. We have already talked with our board about the ability to work with landowners underneath ditches and their ditch companies to do those sorts of things," he said.

"We are also willing to work on a larger scale to help with water management. We think the partnership with the ditch companies could be an opportunity to work together on larger projects to help protect the watershed, the river and streams and bring certainty to us all. "

CAMP VERDE - As the Verde Valley moves closer to the day when property owners will have their surface water rights adjudicated, the importance of the year 1919 will become quite significant.

That is the year Arizona enacted the State Water Code.

Ever since the first territorial Legislature adopted the principle of prior appropriation in 1893, all one needed to establish a surface water right was to post a notice of appropriation, record the appropriation with the county recorder and put the water to a beneficial use.

However, by the turn of the century, water shortages began occurring along the Salt and Gila rivers as a result of overuse.

So in June 1919, the state legislature enacted a new water code, which required anyone appropriating surface water to submit an application to the state's water authority. At the time it was the State Water Commission and later the State Land Department. Today it is the Arizona Department of Water Resources.

If all the requirements were met, and no objections were filed, a certificate of water right could be issued.

Most of the ditches currently diverting water in the Verde Valley were completed prior to 1919. Therefore, it should follow that anyone receiving water from an irrigation ditch would have a historic water right.

But that is not necessarily the case.

Water rights are attached to the land. In 1919 virtually all the surface water being diverted from the Verde River and its tributaries was being applied to large farms.

Over time, most of the large farms were broken into residential lots. And not all the lots were carved, wholly or in part, from the portion of the farm where water had been applied prior to 1919.

In some instances, the residential lots had water applied to only a portion of the parcel that was historically irrigated. In others, no water had ever been applied to any of the parcel.

Nevertheless, owners of the newly created residential lots often began applying water to those lots, and neither they nor the subsequent owners of those lots had applied for a water right as required by state law.

It is the owners of those lots that may face uncertainty in the future.
Report a Typo Contact
Sign up for our e-News Alerts
Most Read
7 days
30 days