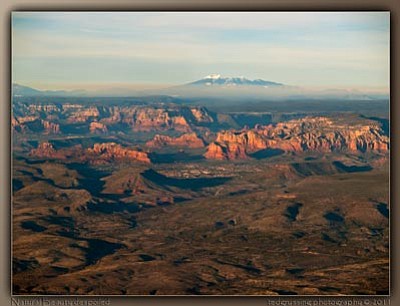 Not a lot of things accomplished today, but it was a very good day.

I flew down to Falcon Field today to have some work done on the Lambada at Performance One Aviation and then flew home late afternoon. It was a beautiful day to be in the air except for the fact that instead of leaving the relatively dirty air of Phoenix and returning to pristine air in Northern Arizona, I returned to air that was not much different than Phoenix. I took this photo from about ten miles SE of Sedona looking NNW. Increasingly the air is looking like this as the USFS relentlessly engages in the act of doing prescribed burns ... and as their notifications say, it is for the health of the forest. The smoke drifts down and fills the lower valleys and that includes Sedona and the Verde Valley.

Because of the potential harm to humans, you cannot light up a cigarette containing an eighth of a gram of tobacco in their offices because of the health risk to humans. It is however acceptable, in the name of health of the forest to throw millions of pounds of smoke into the air that we have to breathe. Breathing remains my favorite exercise! Somehow there is a disconnect here that I do not understand. If a little smoke is bad for humans, is sheer tonnage of smoke good for humans? What about the natural beauty we so enjoy in this area? Where is the lower several thousand feet of the San Francisco Peaks hiding? I had to look at this all the way back from Mesa this afternoon.

I am including the email address to the Arizona Department of Air Quality; they are the ones who approve all of the burns that the USFS do. "The mission of the Air Quality Division is to protect and enhance public health and the environment by controlling present and future sources of air pollution. Director: Eric Massey; Deputy Director: Trevor Baggiore."

Into the weekend, have a wonderful time, be safe, be well and I'll be back Monday morning.