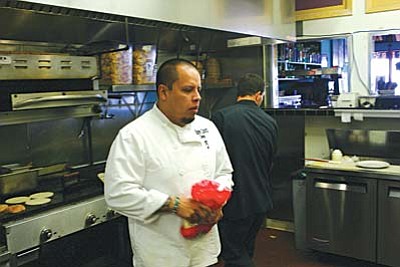 Vladimir Costa is a master chef and owner of 15.Quince in Jerome. The restaurant features New Mexican cuisine. VVN/Philip Wright

JEROME - Within the kitchens of fine restaurants there is a structured hierarchy of chefs. In a simplified version it begins with line cooks, moves up to chefs of different specialties, then up to the sous chef and on up to the executive chef. At the top - and not many restaurants have one - is the master chef.

Vladimir Costa, owner of 15.Quince Grill and Cantina in Jerome, is a master chef. It took many years, accumulating lots of points and passing an eight-day test for Vladimir to finally be certified by the American Chef Federation as a Master Chef in 2004.

"It took me 31 years of hard work to get my first restaurant," Vladimir said.

He was born in La Paz, Bolivia and moved to New Mexico when he was 11. His mother owned a retail store in Taos, and a restaurant opened upstairs. So, at the age of 15, Vladimir became a busboy. "I liked the kitchen," he said.

He still loves the kitchen. Not surprisingly, his specialty is New Mexican cuisine. "New Mexican food is way different from Mexican food," Vladimir explained. "The cultures of New Mexico - Spanish, Native American, Mexican and "cowboy" - all mesh. My base for my food is the chile pepper."

But Vladimir has taken cooking with chile peppers to the level of an art form. In fact, he considers putting raw food onto a canvass - the plate - a special form of art.

He said that a painter stops at certain points during the creation of a painting. But a chef does not have the luxury of taking a break to think about his creation. "In the restaurant business, we are artists, too," Vladimir said. "It has to be a labor of love because you have to keep working."

Vladimir often finds himself talking to the food. "All your concentration is focused," he said. "It makes it better."

As a master chef, Vladimir says his job is that of a teacher. "I can't be in the kitchen all of the time," he said. So he must show his staff how to do things exactly as he does them. "Everything must be consistent."

A master chef takes a person essentially off the street and teaches him or her how to create what the teacher wants done. "You take raw talent and then turn the person loose," he said. "It is very hard. My job becomes tasting food."

As both the executive chef and the master chef in his own restaurant, Vladimir is very demanding, of himself as well as his employees. "Customers have a choice of going anywhere they want," he said. "You can help them make that choice by being better than everybody else."

The pressure of being a chef can be almost overwhelming, according to Vladimir. He said that many chefs turn to alcohol or even drugs in order to cope with the pressure.

"I don't have personal time," he said. "My personal relationships just blow up. But what do you do when you have so much responsibility to others?"

He takes that responsibility very seriously. "My employees are like my family," Vladimir said. He must take care of them because they, too, deal with personal lives and personal problems.

Vladimir uses no MSG or powdered food. His ingredients are fresh and almost all organic. Most days he shops the produce section of Food City, and he picks his produce by hand, examining each avocado or tomato individually. Freshness and quality are key elements in producing the best tasting food.

He knows how to prepare all kinds of food, American, French, Russian and others. "But I love the history behind New Mexican food," he said. "That's why I bring it here."

He brought it here two years ago when he came to Jerome. "I found the Red Rooster and flipped it to Quince," he said.

Vladimir went to college in Las Cruces, N. M. where he studied hotel and restaurant management. He also worked for years in two restaurants in Las Cruces.

After graduation, he went to New York City, which he says is a Mecca for food.

Now he is in Jerome - in his own restaurant -- introducing locals and tourists to authentic New Mexican cuisine.

"You have to put a lot of labor of love into a restaurant," he said.

15.Quince Grill and Cantina is located at 363 Main St. in Jerome. To learn more about the restaurant, its history and menu, go to www.15quincejerome.com. To contact Vladimir call (928) 634-7087 or go online to vlad@15quincejerome.com.