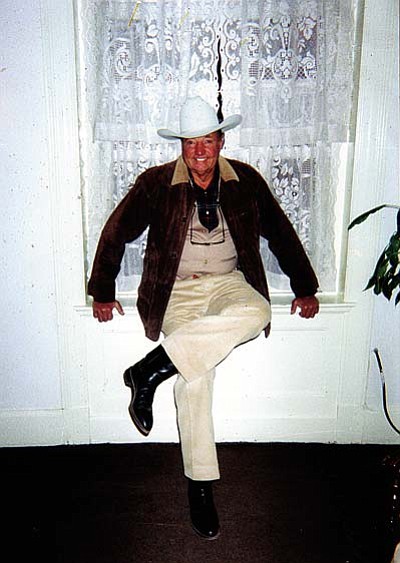 Raymond James Steele, 83, of Sedona, Arizona, and Homer, Alaska, died January 22, 2011, surrounded by his loving family in the University Hospital in Tucson, AZ.

Ray was preceded in death by his brother, William Steele, his sister Minnie Steele Willard; and his parents William Christie and Minnie L. Steele. Ray is survived by his wife Sally V. Steele of Sedona, AZ, and Homer, AK; son Robert R. Steele, of Flagstaff, AZ; daughters Sheri S. Downward (Mark), of Kanab, Utah;  Jennifer I. Steele of Tucson, AZ;  Diane M. Gerrettie of Tucson, AZ; Denise Stearley (Michael) of Cornville, AZ; Harry B. Munsell (Kathy) of South Riding, VA; Mimi M. Dailey (David) of Payson, AZ; and Kim M. Wilmer (Thomas) of Phoenix, AZ; as well as 18 grandchildren and 17 great grandchildren. A memorial service will take place Saturday, January 29, 2011, at 11:00 am at the Church of the Red Rocks on 54 Bowstring Drive in Sedona, AZ.  A second memorial will take place in Homer, Alaska, for the scattering of his ashes in Kachemak Bay in June 2011. In Lieu of flowers, please send any donations to: AMERICAN CANCER SOCIETY payable to Relay for Life, P.O. Box 69, Homer, Alaska, 99603, Attn: Scott Harding. Ray was born August 21, 1927, in Flagstaff AZ, to a Sedona pioneer family who homesteaded the Schnebly Hill Road area.  Their 160 acre homestead was a great place to discover life for a boy.  At age 13, Ray bought his first model-T Ford in Flagstaff for $15.00.  When returning to Sedona with the car, it broke down, and Ray walked home after hiding the car under branches of a tree.  He kept the knowledge from his Dad for quite a while and then brought the car home after he fixed it.  This put Ray on the path of mechanics—vehicles and aviation.  In 1951, Ray joined the army infantry, where he saw heavy combat at the Yalu River in Korea.  When he was discharged from the Army, he came home to Sedona and took the money he saved while in the Army and purchased the Canyon Portal Shell Station.

As Sedona began to develop into the great city it is today, Ray was known as the founding member of many businesses and entrepreneurial entities that help establish and grow the Sedona community we know today—one of the most beautiful and cosmopolitan small cities in America.

Ray Founded the Sedona Airport in 1955. As a founding member he successfully saw the development the following entities:

• One of the 1st volunteer fire chiefs for 7 years

Ray’s adventurous spirit and love of flying brought him to Alaska in 1977 where he became a bush pilot for Cook Inlet Aviation, and then in 1979 began fish spotting for a number of commercial fisherman.  By this time, he had married the love of his life, Sally, and they bought and cleared 5 acres of land overlooking the beautiful Kachemak Bay in Homer, AK, and built a wonderful log home.  This place, and their Sedona Ranch, was their home and anchor as they ventured around the world to Mexico, Europe, New Zealand, but always came back home to the peace and quiet of their log cabin in Alaska.  We will forever miss him. His voice, his wit, his years of experience and wisdom, his gestures, his smile, will always be remembered. We know where to find him—his spirit lives in the open spaces of his beloved American West and the wilderness of Alaska.  His influence is very much alive in the hearts of all of us who knew and loved him.