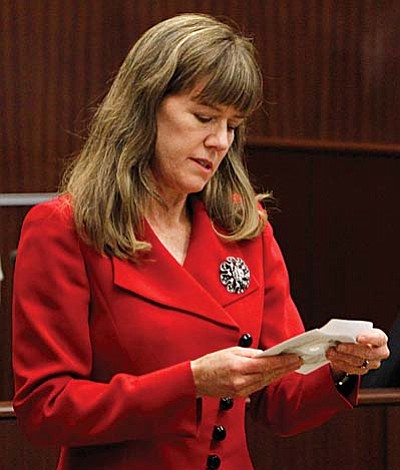 James Arthur Ray’s defense counsel’s heated objections to an audio clip that Yavapai County Attorney Sheila Polk played during closing her closing argument in the aggravation phase of Ray’s trial were over an admitted error that “resulted in no prejudice to the Defendant,” according to a motion filed Monday.

James Arthur Ray's defense counsel's heated objections to an audio clip that Yavapai County Attorney Sheila Polk played during closing her closing argument in the aggravation phase of Ray's trial were over an admitted error that "resulted in no prejudice to the Defendant," according to a motion filed Monday.

Ray, a self-help author and speaker whom a jury found guilty of three counts of negligent homicide on June 22, is free on bond pending a sentencing hearing scheduled for July 25.

Jurors found him responsible for the October 2009 deaths of Kirby Brown, James Shore and Liz Neuman during a sweat lodge ceremony near Sedona.

Those same jurors found that the state had proven one aggravating factor in the cases of each victim, that the deaths had caused their families emotional harm.

In Neuman's case the jury also found a second factor, that as a volunteer at Ray's Spiritual Warrior seminar, she held Ray in a unique position of trust in regard to her safety.

In Monday's notice to the court, the prosecution argued that, because the jury did not find that Ray had caused the deaths in order to benefit monetarily, the playing of the clip, in which Ray asks his clients "isn't that why you made the investment to be here," is harmless.

Much additional testimony, the motion notes, was available to prove that Ray's clients paid nearly $10,000 each to attend the five-day event.

The state had earlier filed a notice with the court indicating that the clip in question had indeed been played during the guilt phase of the trial.

The four-month trial in Camp Verde was often marred by legal disputes, and Judge Warren Darrow found twice that the state had committed disclosure violations, first in failing to reveal what took place in a December 2009 meeting between prosecutors and coroners and again when he learned that the state had not forwarded a report from an environmental consultant to the defense.

He later denied a mistrial motion over the second disclosure violation, finding that the defense still had time to call the consultant as a witness, which they chose not to do.

Both the state and the defense are bound by a gag order and so cannot publicly discuss the case at this time.

Ray's potential sentencing options range from probation to as long as nine years in prison. After sentencing, Ray will have 20 days to file an appeal.