Sherry Bailey to retire from Clarkdale Sept. 1
Jodie Filardo to take over for community development 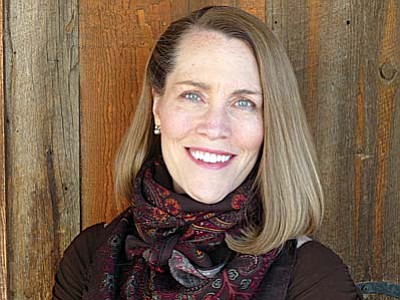 CLARKDALE - Town Manager Gayle Mabery has announced that in mid-June Sherry Bailey, director of Community Development, informed staff that she will retire Sept. 1.

Mabery said that Bailey joined the town staff in August 2005 as the Planning Manager in the Community Development Department. She was appointed as the department director in December of that year.

"The six years that Sherry served in Clarkdale were some of the most challenging the Town of Clarkdale has faced, first with explosive growth, and ultimately through our most significant economic downturn," Mabery said.

Mabery added that through the entire period, Bailey's knowledge and experience have been invaluable assets to the town. "Her presence as a staff member in Clarkdale will be sorely missed, but we are happy to know she'll remain a citizen of Clarkdale in her retirement."

Bailey has some definite plans for her retirement. "I am now going to travel and play, weave, write and play, do my photography and play," she said.

"I have loved working here," Bailey said. "Clarkdale has a team attitude and it actually works and works well." She added that in Clarkdale the team is broader that just the town staff, including the residents that volunteer for boards, commissions and committees. Bailey included the local business community in that group because they often pitch in and help.

Mabery explained that Jodie Filardo has accepted the position as the Director of Community and Economic Development.

"I believe that Jodie's leadership in the economic development arena in particular provides the right fit at the right time for Clarkdale," Mabery said. "Her added experience with sustainability issues make her a great fit to take on this role in our organization at this time."

Mabery said that to ensure continuity with planning efforts in both the community development department and the Sustainable Clarkdale project, the town will hire a senior planner to work at Filardo's direction.

Filardo and the senior planner will split their work approximately 50/50 between the Community and Economic Development Department and Sustainable Clarkdale.

Filardo said that in her new combined position, she will continue to work on both the Sustainable Clarkdale initiative and the new Verde River @ Clarkdale project.

"While Sherry will never be replaced, my hope is to honor the path toward sustainability she's begun and to further that work for the Town of Clarkdale," Filardo said.