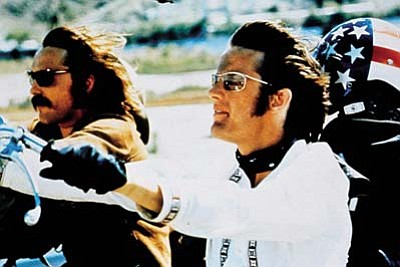 A Summer Place – “It’s my favorite movie of my entire life. I have never wavered from that. I loved the innocent romance (sort of) and the true love they found. It’s corny, but I loved it and still do.”

Auntie Mame – (This Boomer also nominated “Gigi” and “My Fair Lady” for the same reasons.) -- “These movies were great entertainment. I’ve seen them all multiple times. I loved the costumes, the sets, and the elegance of all three movies.”

Ben-Hur – “It is the story of how Christ crossed one man’s path several times during his lifetime. It is a story of survival and endurance, of circumstance, and providence.” Another comment: “The chariot race is still one of the top ten action clips ever filmed.” A third Boomer’s quote: “I saw it because I had read the book.”

Big Chill – A college favorite. “I recall having a very visceral reaction to the idea of my husband sharing DNA with my best friend. I thought, ‘No way, no how.’ Now I think I better understand both women’s impulse – first to ask and second to agree.”

Butch Cassidy and the Sundance Kid

Dr. Zhivago – “What impressed me was Julie Christie.” Another comment: “It was a love story, but it also had a great history lesson in it, and I loved history.”

Easy Rider – “It introduced me to the counter-culture.”

Flight of the Phoenix – “I like the original, with Jimmy Stewart. It tweaked my interest in aviation and international travel, and I’m still tweaked!”

Footloose – “The theme of breaking the rules when they need to be broken has been a life theme of mine.”

From Russia with Love – “The fight scene on the train was the first realistic fight scene I’d seen.”

Grease – “I saw it probably 100 times the summer it came out. (It helped that I worked in a movie theater.) I’d slip from behind the concession stand and go stand in the door of the theater. I learned all the words to all the songs; in fact, I probably still know them all.” Another Boomer’s comment: “Oh, to be cool and in high school!”

Goldfinger – “Of all the James Bond films, this is my pick. This suave secret agent man gets the bad guys AND the girls.”

How to Marry a Millionaire – “Virna Lisi.”

Invasion of the Body Snatchers – This is my personal favorite. It’s about pods from outer space who can inhabit human bodies. A small town doctor (Kevin McCarthy) discovers his friends and patients are being replaced by these other-worldly creatures. For the first time, it made me realize that things are not always what they seem…and that it is good to be skeptical.

Parent Trap – “The original had Hayley Mills, Brian Keith, and Maureen O’Hara. I wanted to live on a ranch with Brian Keith and swim in his pool every day. I wanted to marry him.”

Red River – “It depicts a cattle drive as it most likely really was.”

Rocky Horror Picture Show – “I loved an excuse to be out really late, and it was so bizarre!”

Shot in the Dark – “Superb acting.”

The Sound of Music – “It was special because it showed how a man without a wife and so many kids found his true love instead of the love he was originally going to marry. All of us girls wanted to be Maria and have that wedding.” Another Boomer’s comment: “It had great songs, a very happy ending, cute kids, romance…it kind of had it all.”

Star Wars -- “I saw it on vacation. The special effects had us all shooting lasers at imaginary space ships as we drove by familiar sights on the way home.”

Ten Commandments – “It is a Bible story in spectacular form.”

The Graduate – “It seemed to capture our generation’s reaction to our parents’ generation.”

Them – “It was about giant ants – mutated by the nuclear tests in New Mexico – that take over the world. I was pretty young when I saw it, and it made me never trust any side effects of technology.”

To Kill A Mockingbird – “Another loss of innocence, this time regarding race. How did I go through my entire childhood without being aware of racial prejudice?”

Trapeze – “My Dad has been a Shriner. Each year the Shrine Circus would come to town, and we loved going. Dad took us to the movie theater to see ‘Trapeze,’ and I would have joined the circus if I could have been the star on a trapeze.”

Twenty Thousand Leagues Under the Sea – “I saw it in elementary school, and thought it was really cool.”

2001: A Space Odyssey – “I stopped and watched on a TV in a downtown department store when Neil Armstrong set foot on the moon. The movie had been released the year before that. I thought we were going to really do it…and would be living in space and mining asteroids by now.” Another comment: “It was the ultimate science fiction movie.”

Best years of TV for you and me
'What do you want to be when you grow up?'
Rags, wheels, and other teen trends
Favorite games and toys for girls and boys
How should we prepare to face the future?