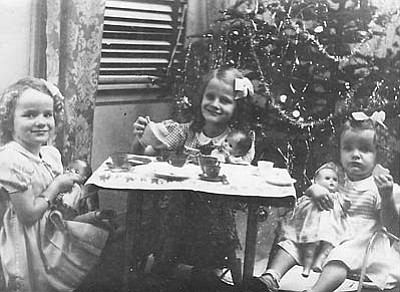 Tea parties were very important for young girls in the ‘50s. The photo was taken by Sandi Ashton’s father, Herman Flocken, and developed in the bathroom/bathtub in their house. Sandi Ashton: “Although the tea set is long gone I have the table that held this tea party in my living room today.” From left: Marie Harron, Anita Smith and Sandi Ashton. Submitted by Sandi Ashton of Camp Verde.

OK, Boomers, here’s a sad admission from one of your own: I try to constrict two minutes’ worth of activity into every minute of each waking hour. I admit this freely because (a) I want to do a lot of things before my heart stops, and (b) a bunch of you have told me the same thing.

Why are we like this? Maybe it’s because we were raised during a time when adults who grew up during the Depression sought to improve their lives in the 1950’s and 1960’s.

In large numbers, they subscribed to more magazines, and joined book and record clubs in an effort to continue their educations, and pursue new interests.

“I had loads of stuff to read,” recalled W.R. “My parents, aunts and uncles, and grandparents subscribed to lots of magazines, and my grandmother received periodic condensed books of best-sellers. What a concept! One could sit down and – in only a few hours – be up-to-date on the modern classics.”

Even young readers could understand great novels, the latest detective thriller, or serious history if stories were delivered to them in short, digestible packages.

A few said their voracious reading activities were initially nurtured in first grade. Reading began – for many of us – with the word list.

We memorized a bunch of words printed on a large chart, or on flash cards. Then, the teacher could stack these now-recognizable letter combinations into simple sentences and – suddenly – we could READ!

Next, these simple words were grouped with pictures of complex items like a BIRDBATH or AIRPLANE or BULLDOZER. We had books combining letters and pictures together, which simultaneously built our vocabulary while telling a simple story. What a genius idea!

Then, we got exposed to another narrative format few of us could resist. What was it?

“There were five kids in my family,” J.A. remembered. “Every summer we spent several weeks visiting our grandparents. My grandmother bought loads of comic books for us.

“Those books got handled so much, she began to stitch the spines with thread so we could continue reading them. Wow, we had hundred of those books! The stories were exciting, simple, and vividly illustrated.

“At a family reunion recently, we began to talk about those great stories. Nobody remembers what happened to them…but I sure wish we had them back.”

Favorite games and toys for girls and boys
How should we prepare to face the future?
2011: Movie favorites: Just pop culture, or our generation's true beliefs?
Best years of TV for you and me
Rags, wheels, and other teen trends