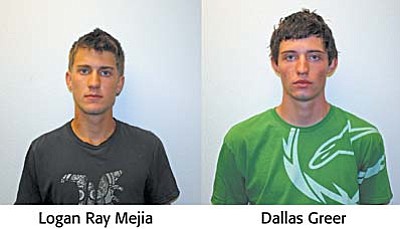 Police were investigating reports from several businesses in recent months that had gas stolen from their work and service vehicles. Many of these vehicles were behind locked gates or on closed premises the suspects entered. June 10, Cottonwood police located a vehicle parked at one such business in a secluded location after business hours.

The vehicle was a white Ford Ranger pick-up belonging to Dallas Greer, 18. The truck had gas siphoning tools along with copper tubing.

Greer was located along with a second suspect, Logan Ray Mejia, also 18.

After interviews, it was determined more than 10 businesses were victims of this theft.

The copper tubing found inside the pick-up truck was believed to have been stolen.