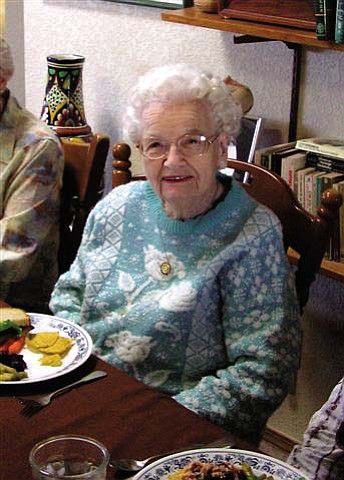 She was born in Albert Lea, Minnesota, November 18, 1916, the daughter of Dr. Hiram Burns and Corinne S. Burns.

She graduated from Albert Lea High School in 1933 and from Wellesley College, MA in 1938. After working two years doing medical research in Presbyterian Hospital in New York City, she attended the University of Minnesota Medical School where she was one of three Albert Lea women trained as medical doctors under Minnesota’s 10 percent quota for women in medical school. She graduated in 1944.

After completing her internship she enlisted in the U.S. Navy Medical Corps and was stationed at Great Lakes Naval Station in Chicago for 18 months. After the war, she practiced medicine in Duluth, Minnesota; Fairbanks, Alaska; and Albert Lea, Minnesota.

While in Albert Lea she enjoyed traveling and leading tours worldwide.

In 1958, after she married Clifford Lush, they moved to Minnetonka, Minnesota, where she worked at the University of Minnesota health service and in public schools. In the early 1940s Dr. Burns had bought property on Gunflint Lake on the Minnesota side of the Canadian border and built a cabin there. She remained a summer resident there all her life.

In the early days, she helped with emergency medical treatments up the Gunflint Trail, such as sewing up axe wounds and removing fishhooks. There was no hospital in Grand Marais at that time.

When she and her husband retired in 1974, they spent their winters in Lake Havasu City, Arizona, until they bought property in Cottonwood, Arizona, where she lived for 10 years.

She was a member of the Verde Valley Presbyterian Church and the P.E.O. Sisterhood. In March 2008 she returned to Minnesota to live with her daughters in Glencoe.

She was preceded in death by her parents, her brother Robert D. Burns, and her husband Clifford Lush. She is survived by her sisters Alice Gilmore of Cottonwood, Arizona and Margery Carlson of Bloomfield, Connecticut; daughters Barbara Henderson and Betty Robson, and stepdaughter Judy Johnston of Spokane, Washington, as well as nieces, nephews and grandchildren.

Memorial services in Albert Lea and Northern Minnesota are pending.