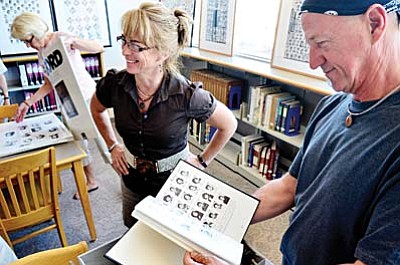 COTTONWOOD - Some historical high school yearbooks were returned Wednesday to the historical societies and museums in the towns where the schools operated before Mingus Union High School opened in 1972 in Cottonwood.

The current MUHS district is made up of what used to be three separate high school districts in Clarkdale, Cottonwood and Jerome.

In 1950 two high schools combined as the Mingus High School in Jerome, and that school served Clarkdale and Jerome students until 1958.

It was in 1959 when Cottonwood students joined Clarkdale and Jerome as the Mingus Union High School in Jerome. That high school operated in Jerome until 1972 when the district moved to its current campus at 1801 E. Fir St. in Cottonwood.

After the schools combined, some of the yearbooks -- from the earlier period when high schools existed independently in Clarkdale, Cottonwood and Jerome - remained at MUHS.

Recently, Clarkdale residents Ruth Wicks and Bob Beltz were talking about how good it would be for those high school annuals to come back to the historical groups in each of the original high school towns.

Ruth made some calls, and soon a date was set for the historical societies and museums in Cottonwood, Clarkdale and Jerome to meet at MUHS and pick up the historical annuals.

That happened Wednesday afternoon in the Mingus Library.

Drake Meinke of the Clarkdale Historical Society and Museum was present to receive the annuals from Clarkdale High School. "We have some on display in a case," Meinke said. He added that the yearbooks not on open display will be available in the museum's archive storage.

James Tomlinson, administrative manager for the Jerome Historical Society, needed a truck to carry annuals back to Jerome for the years 1906 into the 1970s.

"We'll keep them at the archives in the historical society on Clark Street," Tomlinson said.

Betty Gaudy of the Clemenceau Heritage Museum in Cottonwood was on hand to collect the annuals from Cottonwood High School.

"They're going in the archives," she said, "because we have the originals on the wall."

The old yearbooks may be viewed at the societies in each town.