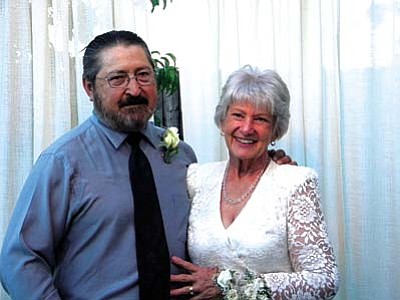 June 12, 2011 was the 50th wedding anniversary of Robert and Arlene (Blahnik) Sandoval. They were married in Prescott Arizona in 1961. They met while attending Mingus Union High School in Jerome and have lived their married lives in Jerome and Cottonwood. Robert worked the mines of Jerome and was employed and retired from Phoenix Cement. Arlene was employed with Town of Clarkdale, Cordes Water Company, and retired from Yavapai College. Their anniversary was marked with a dinner hosted by their four children, Tina Rowden, Mike Sandoval, Melinda Huffman, Laurie Bueno and their spouses. Their 15 grandchildren and four great-grandchildren continued the celebration of this occasion on June 18, 2011 with a surprise party. Family and friends congratulate them and express the best of wishes on this Golden Anniversary.