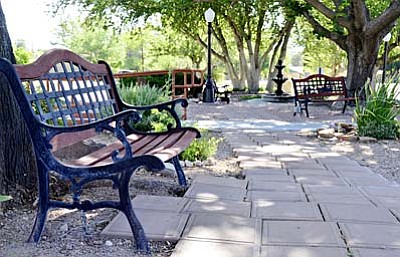 The unincorporated communities of Beaver Creek were among the first established in the Verde Valley. Shortly after a group of farmers from the Prescott area settled on Clear Creek, new arrivals discovered similar opportunities for farming and ranching were available along Beaver Creek.

The tiny enclave has grown considerably since Wales Arnold, his wife Sarah and their partner Joseph Burroughs settled the first ranch/farm in 1870. Today the communities of Rimrock, McGuireville and Lake Montezuma boast a population of nearly 7,000.

Besides having one of the oldest continuously operating school districts in Arizona, the community has a rich history, its own fire district, and camaraderie among its residents that would be hard to top in any small town.

Located just off Interstate 17, McGuireville was for some time known as “The Station,” named for a gas station operated by Eugene McGuire, long before there was an interstate highway going by. McGuire’s station was a stopover on the dirt road from Camp Verde to Stoneman Lake.

Rimrock was named for a dude ranch that once operated in the area. If fact, there were several dude ranches spread across the landscape. The remoteness of the country made them popular with eastern visitors wanting to play cowboy, Hollywood stars wanting to shed the limelight and members of the criminal underworld looking to escape scrutiny. A small airport built to serve the dude ranch clientele is one of Arizona’s oldest and is still in use.

The community of Lake Montezuma was created when one of the area ranches was divided and developed. Area residents are currently in escrow to purchase the developments historic golf course and restaurant and turn them into publicly owner facilities.

Located just east of Interstate 17, about five miles north of Camp Verde, Beaver Creek has continued to grow in spite of the recent economic downturn. Traditionally a community of retirees, affordable housing has made it popular with young families.

Most of the businesses are service providers or connected to the construction trade, along with a few specialty shops and eateries.