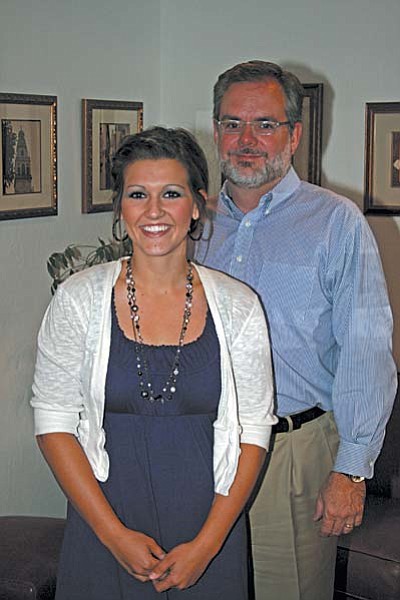 VVN/Philip Wright<br /><br /><!-- 1upcrlf2 -->James Ledbetter, president of the Mingus Union High School Governing Board, and recent MUHS graduate Lashea Taylor, recently met with the Verde Independent to recap some of the highlights and successes of the school district’s just finished school year. Taylor is employed this summer by the Ledbetter Law Firm.

COTTONWOOD - James Ledbetter, school board president for Mingus Union High School, takes a lot of pride in the fact that the district achieved much success and developed new programs during a statewide budget crisis that has forced many school districts to cut programs.

Ledbetter and recent graduate Lashea Taylor sat down with the Verde Independent to go over some of the bright spots for Mingus during the school year that just ended. The gist of the discussion focused on a list of achievements prepared by Principal Tamara Addis.

"It's been quite a year, with a lot of great progress in academics," Ledbetter said. He added that the district has returned to its original focus of doing the very best for the kids.

"It's exciting to see what's been going on," he said.

And a lot has been going on.

For Lashea, one of the best things to come out of this past year was a feeling of more stability at the school. She said that during her four years at Mingus there was a new change every year. "This year has been a great year," she said. "The changes they've made will make the school great."

In Addis's report, she points out that Mingus remains a "comprehensive high school, which continues to add programs" during a financially challenging time.

Ledbetter agrees. "Other schools have lost programs, such as art," he said.

In fact, Mingus has drawn students from other school districts because of the successful fine arts and performing arts departments. The additional state funds those students bring with them actually pay much of the salaries of teachers in those programs.

Tyler Novak's art students continued the department's tradition of winning most of the awards and available prize and scholarship money during this year's competitions. Among the students' successes were top awards at the Yavapai County Fair, the Prescott Fine Arts Portfolio Show, the Northern Arizona Student Art Show and the Sedona Arts Festival Scholarship competition. Students also took first and third place in the Arizona District 1 Congressional Art Show.

Under James Ball, the theater and choir director, Mingus performing arts students have built such a following among area residents that the group's final production of the year - Anything Goes - drew a total audience of 1,700 with five performances.

Another department at Mingus that achieves much success year after year is agriculture. Among other awards earned during the past school year, a team of four MUHS FFA students won the State Aquaculture Contest during the State FFA Career Development competition in March at the University of Arizona.

During the SkillsUSA State Championship in Phoenix during April, the MUHS welding fabrication team won gold for the second year in a row. That qualified the team to compete in the SkillsUSA National Leadership and Skill Conference in Kansas City, Mo. June 20 - 25.

The Advanced Placement classes at Mingus were recognized this year by being named to the AP Achievement List by the College Board for significant gains in AP access and student performance. Mingus was one of only 388 districts so recognized nationally.

Ledbetter pointed out that Mingus climbed back up to a "Highly Performing" status under the Arizona Learns labeling system.

Two Mingus students won Congress-Bundestag Scholarships this year. Only five students are chosen each year. The scholarship is sponsored by the US Congress and Germany's Bundestag (Parliament). The students receive an all expenses paid intensive three week German language course followed with a year of study in Germany.

One of the most successful academic programs at MUHS was created during Superintendent Tim Foist's first year. The Academy at Mingus was originally formed in its own building on campus to give students a second chance at a high school diploma. The program was offered to students who had already dropped out or who had fallen so far behind that graduation seemed impossible.

"The academy had another 15 kids graduate," Ledbetter said. "Many of the academy kids come back into the high school."

Ledbetter pointed out that academy students in good standing are considered Mingus students, and they are eligible to take part in extracurricular activities, including sports. The academy has a waiting list.

Now there is going to be an online curriculum that will help even more students obtain a high school degree.

In Addis's recap, she states that the acceptance of an Arizona Online Program proposal will drive an online instructional program. That program will offer more opportunities for Mingus students, as well as students who are unable to attend regular classes.

Ledbetter said that Mingus, during a time of difficult budgets, has been able to expand course offerings, including an advanced Spanish curriculum, another English course and career and technology courses. The school has added positions in CTE.

Dual enrollment courses continue to expand at MUHS. These courses allow Mingus students to obtain high school credit and college credit at the same time for the same course. The dual credit courses do in fact save students tuition money and help them move through the first couple of years of college quicker.

School officials are working to expand outreach and collaborations. Once a month, the superintendent and principal meet for coffee and rolls with parents to discuss matters of common interest.

In summarizing the achievements during the past year at Mingus Union, Ledbetter said, "There are so many teachers there who invest in the kids' individual lives. And that makes all the difference."