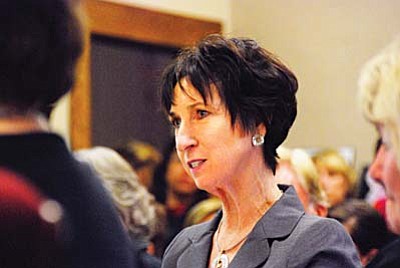 Superintendent Barbara U’Ren if the governor’s budget passes, U’Ren said there is a real possibility of keeping OCS open as a kindergarten through sixth grade school. But neither is that a done deal. U’Ren said the board will hold another workshop on the issue before next Tuesday’s scheduled board meeting.

CORNVILLE - A recent survey sent to Cornville residents by the Cottonwood-Oak Creek School District not only asks questions but also has raised a couple of new ones. The survey asks five questions of parents with children enrolled, or who could be enrolled, in OCS, primarily about restructuring the school into kindergarten through sixth grade. The school currently serves kindergarten through eighth grades.

In recent months, OCS and Tavasci Elementary have been seriously considered by the school board for closure to help the district through a period of budget crisis. Parents and community members from Cornville have been vocal and active in protesting the closure of OCS, which is considered by many to be the heart of the community.

Once the survey was sent out, some people asked why the district would conduct the survey if the closure of Oak Creek School is already a done deal.

"The decision has not been made," Superintendent Barbara U'Ren told the Verde Independent in response to that question. "It is not a done deal."

U'Ren explained that the options of closing either or both of Oak Creek School and Tavasci had to be considered by the board because last fall predictions were that the district would see a shortfall in next year's funding of $1.5 million.

But now Governor Jan Brewer has released her proposed budget, and, according to U'Ren, that budget is not as dire as had been predicted.

"If her budget passes, funding might be flat," U'Ren said. She explained that "flat" means the district would not see the deep cuts that were expected for next year. Those cuts would have been crippling because they would come on top of other deep funding cuts during the past two to three budget years.

But flat funding from the state may allow the board some options it did not see even a few weeks ago.

"We're trying to project three years out," U'Ren said. She said budgeting on flat funding for three years is a gamble. She said the question that comes up is whether the district has other options if it takes another serious budget hit during those three years.

But for now, if the governor's budget passes, U'Ren said there is a real possibility of keeping OCS open as a kindergarten through sixth grade school. But neither is that a done deal. U'Ren said the board will hold another workshop on the issue before next Tuesday's scheduled board meeting.

In addition to having to weigh the funding, or cuts in funding, that will come from the state, the board and administration is already faced with a significant decline in enrollment. Much of state funding is directly related to a district's average daily maintenance (enrollment). U'Ren said right now it looks like the district's ADM is the lowest since 1999.

U'Ren does caution that if OCS stays open, in whatever structure, it will look different than it does now.

She said one important reason the survey was sent out is because the board and administration want to know if OCS parents will commit to keeping the kids at the school.

"If Oak Creek closes, we stand a good chance of losing students," U'Ren said. That loss of ADM would be damaging to the district's budget.

Regarding the survey, U'Ren said the options are all open at this point. She said the school board takes all public input very seriously.

"This governing board doesn't make a decision until it has considered all factors," U'Ren said. "We're not done. We still have a lot of work to do."

COTTONWOOD - The Mingus Union School Board will discuss taking over operation of Oak Creek School and running it for a few years as a charter school. Such an arrangement would require approval of an intergovernmental agreement between the MUHS board and the Cottonwood-Oak Creek Governing Board.

James Ledbetter, MUHS board president, told the Verde Independent Tuesday that he has placed this discussion on the agenda of next Tuesday's Mingus board meeting. That board meeting, scheduled at its regular time on Thursday, has been moved to Tuesday, March 8, 6:30 p.m. with a 6 p.m. work session, in the school library at 1801 E. Fir St. in Cottonwood.

The Cottonwood-Oak Creek School District Governing Board has been moving toward closing Oak Creek School and also Tavasci Elementary School as a last-ditch effort to balance a budget that may have deep funding cuts from the state.

In recent weeks, COC district has been looking at other options, including keeping Oak Creek School open as a kindergarten through sixth-grade school. New options have come open because Governor Jan Brewer's proposed budget isn't as dire as expected. Last fall, predictions were that COC would face a shortfall next year of $1.5 million.

Ledbetter said the proposal would have Mingus Union operate Oak Creek School for a period of a few years. "We would do so through an inter-governmental agreement that would, subject to our board's and that of COC's approval, end on a date certain, allowing COC to, thereafter, operate the school, again."

Ledbetter said, "This would be great for students, keep a great school open, retain jobs and be good for the community."

He said that he is only one board member, but he thought it is worth discussing with his colleagues.

Ledbetter said that he thinks the school, if operated by MUHS, should be kept as a kindergarten through eighth-grade school. "Because the MUHS District is 9-12, it would likely need to be a charter, especially as the IGA would be temporary."
Contact
Sign up for our e-News Alerts
Most Read
7 days
30 days