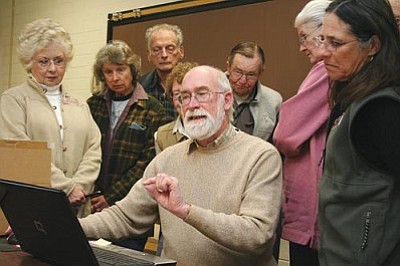 Coconino National Forest archeologist Peter Pilles spends much of his time working along side of and training amateur archaeologists.

This four-part series is presented as part of Archaeology & Heritage Awareness Month. It tells the stories of a growing number of volunteer archaeologists, regular folks whom professionals in the field have come to welcome, not only for the assistance they have provided, but also for the contributions they have made to understanding the ancient culture that once occupied the American Southwest.

CAMP VERDE - In 1974, Washington State University archaeologist and professor Bill Lipe wrote a paper entitled "A Conservation Model for American Archaeology" voicing his concerns over the destruction and disappearance of America's ancient treasures.

Having participated in the Glen Canyon Project in the 1950s and 1960s, he had seen first hand the effects of growth and development. What wasn't being swallowed by reservoirs or cleared by bulldozers was being vandalized by a public that was losing touch with its collective past.

Lipe believed that, if something wasn't done soon, much of the historic record of America's ancient civilizations would soon be lost forever.

In his paper, Lipe laid the groundwork for that "something." He argued that it was time to change the emphasis of archaeology from one of academic research to one of conserving those sites that still left.

And he argued that the best way to do that was to take archaeology out of the hallowed halls of academia and go public, and that by doing so the public would take ownership of what was rightfully theirs to begin with.

The transformation, which began with his seminal paper 37 years ago, is ongoing, but its success is told in the growing number of everyday folks who find themselves drawn to the mysteries of those who came before.

Today, there are more non-professionals digging in the dirt, cataloging artifacts and drawing conclusions about what they have discovered than there are professionals.

And the professionals couldn't be happier.

As the archaeologist for Coconino National Forest, Peter Pilles is responsible for the care and preservation of a 1.8 million acre landscape, littered with literally thousand of sites.

Having spent over 35 years working with volunteers, he is quick to point out that the relationship between professionals and the public has become a two-way street.

"As a Forest Service employee I spend much of my time dealing with the public, answering questions, talking to various groups about local archaeology or just discussing archaeology on the forest.

"But, on the other hand, the public, especially members of the Arizona Archaeology Society and the Friends of the Forest, do a tremendous amount of work for us. I think it would be safe to say that if it wasn't for volunteers, there would be no public archaeology," Pilles says.

Fellow archaeologist David Wilcox, now retired from the Museum of Northern Arizona, has worked side by side with volunteers in the Verde Valley since 1995 and is responsible for training many of them in everything from excavation, to mapping, to ceramics identification, to cataloguing, to artifact analysis.

"A lot of the work we do would simply not get done without their help. Over the years, they have logged tens of thousands of hours. There has never been a better time for someone with an interest in archaeology to participate. There are some rules but we are willing to train anyone who wants to learn," Wilcox says.

There are currently more than 150 members of the Verde Valley Chapter of the Arizona Archaeological Society and the newly formed Verde Valley Archaeology Center, many of whom are actively volunteering as avocational archaeologists, the name given to those who have gone through the training.

Over the last 40 years, they have excavated, preserved, surveyed and mapped hundreds of sites throughout Central and Northern Arizona. They have helped document, catalogue, archive and analyze thousands of artifacts.

They help maintain and interpret sites such as Honanki and the V Bar V petroglyph site, and they serve as site stewards keeping an eye on dozens of the more obscure and remote sites throughout the region.

Sharon Olsen is one of them.

Raised in Central Arizona, Olsen says she wasn't all that interested in archaeology until she returned from college.

"I came back after getting a degree in anthropology and realized I had never considered what had been going on in my own back yard. Boy, do I wish I had been paying attention when I was younger," Olsen says.

Today she credits archaeologists like Pilles and Wilcox for the fun and success she and other volunteers have shared.

"If we did not have advisors like David Wilcox and Peter Pilles, I don't think you would have had as much public participation. They were able to work patiently with the less-than-student-quality volunteers, walk them through the steps and teach them an appreciation for what they were looking for, or at," Olsen says.

Jim Graceffa, who is now the president of the Verde Valley Archaeology Center, retired from a career as a dentist and, over the last 11 years, has become an expert on ceramics, even teaching pottery analysis of the Verde Valley and North Central Arizona to other volunteers.

"It was my wife Diane who was interested. She hauled me down to a meeting of the archaeological society. I got hooked. Got certified. Met Peter Pilles. And you know how it is if someone is willing to volunteer, there is always someone willing to accept the help," Graceffa says.

According to Pilles, professionals recognize Graceffa's expertise, as well as that of other amateurs, across the state.

"Jim is an example of one of those avocational archaeologists who has immersed himself to a point where he is as good as any professional and in some instances better," Pilles says.

But pursuing an expertise is not the only reason people join into the fun. Some just like to go on field trips. Others just want to get a handle on what all those fallen rock walls and broken pots are all about.

Bud Henderson, who also happens to an expert in several fields, says his joys are simple and many.

"I have not only received a graduate level education in archaeology for little or no cost, I've also lost a running board and perhaps a fender or a bumper out banging around on rough back roads. I consider my trips to the out of the way to be therapeutic and a part of my health and exercise regimen," he says. "But most importantly, if you have any sense of wonder at all, you cannot help but be in awe of the culture that was once here.

"You can't hold a stone tool or a projectile point without appreciating the artistry of their work, or what they had to do to survive. They weren't naked savages. They had a culture I have really learned to appreciate."

Part 2: Ken and the Wall: An amateur's work piques the interest of pros