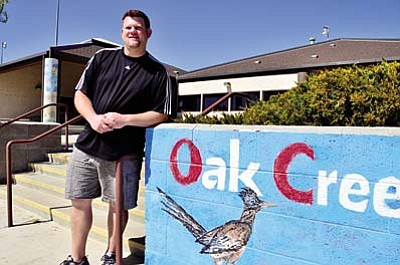 Donnie Shanks is now in his 11th year teaching at Oak Creek School. He started as a first grade teacher and then moved to eighth grade math and physical education. He is now the school&#8217;s athletic director and PE teacher.<br /><br /><!-- 1upcrlf2 -->

He said he didn’t get into teaching for any honors. “But it’s nice to be recognized,” he said.

Shanks said he thinks all of the teachers he works with should be honored. “Teachers put in the work every day to educate the kids,” he said.

He is now in his 11th year teaching at Oak Creek School. He started as a first grade teacher and then moved to eighth grade math and physical education. He is now the school’s athletic director and PE teacher.

But Shanks’ connection with OCS began before he became a teacher there. At Mingus Union High School he got into a program to teach art at Oak Creek School and Clarkdale-Jerome School.

“I did an internship at OCS my second year at Yavapai College,” Shanks said. “Then I transferred to Northern Arizona University. I also did my student teaching at OCS.”

He and his wife, Terra, now have a daughter in pre-school at Oak Creek School.

Recently, Shanks received the Doug Colletti Sportsmanship Award, an award voted on by all school district coaches and athletic directors in the Verde Valley.

Terra said Donnie worked for 10 years to earn the sportsmanship award. “He is always advising his students and athletes to have good attitudes and excellent sportsmanship,” she said.

Terra said that after Donnie graduated from NAU in 1999 with his degree in elementary education and early childhood development, he realized his dream when he started teaching at Oak Creek School.

“Donnie’s love and admiration of these children is what makes him such an inspiration in many lives, including mine,” Terra said.

She said Donnie is always pleasant and encouraging his students to do their very best and have fun. She said he always encourages everyone around him to become a better person.

“Donnie is an amazing dad, coach, friend, son, brother, grandson, husband, teacher and mentor,” Terra said. “He consistently puts his heart into everyday life and is willing to do anything for anyone.”