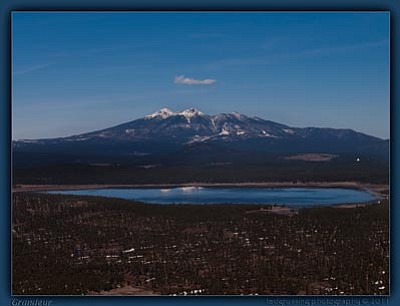 At home I have two very fine tripods and a nice carbon fiber monopod; except for studio shoots I don't use any of them as I consider them to be more pain than anything. At the Sedona Airport I keep another carbon fiber tripod which is everything that the ground based equipment is not; plus it is fun.

After church this morning, Corky and I headed up to the airport so that she could get some airtime too. It was a fabulous day and the air looked really good when you had the sun at your back. Looking from the North to South was not so pretty with a substantial layer of smoke filling the valleys. So we headed north and spent some time around the peaks and the lift was great and went to well over 14,000'. It was the first good soaring day of the year for me and Corky has the stomach for it so we had fun.

Rogers Lake has a pretty good fill of water now so the challenge was to get a shot similar to others I have seen from the Rockies and other mountain areas, to wit a lake reflecting the mountains in the distance. I made passes starting at 11,000' and worked my way down to about 700' above the trees before I got the image I wanted with the snow capped peaks reflecting in the water. The white dot just above right center is the Lowell Observatory. Rogers Lake has quite a history and back in the 1940s and 50s the lake was a beautiful lake full time and was a playground for those with large yachts which were kept on the lake. Sometime in the late sixties/seventies the lake was drained for what reason I don't know. Last fall the 2250 acres which comprise the lake and environs was purchased from the state by Coconino County. Here's hoping they restore the lake to original size.

Then this evening it was over to some friends for dinner and watching some movies. Home just a little while ago so I is time to close the weekend out and welcome a new work day; have a great day.

While yet we talk and linger late at parting,

And this say o'er each day as my last words,

Success will come by love and truth and work.