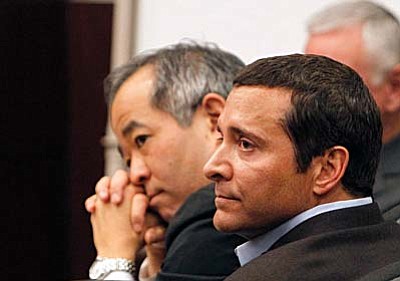 CAMP VERDE - James Arthur Ray promised the participants in his 2009 Spiritual Warrior seminar that, during the upcoming sweat lodge ceremony, they would achieve altered states beyond anything they had ever experienced that would help them attain the breakthroughs they were seeking.

It seems doubtful, though, that the altered states the participants had in mind involved the disorientation, injury and unconsciousness that two men, Lou Caci and Stephen Ray (no relation), testified they went through.

Caci, a senior wealth advisor from Winnipeg, Canada, has been mentioned by most of the previous witnesses, who recalled him burning himself on the hot stones that heated the sweat lodge at the Angel Valley Retreat Center near Sedona.

Caci said he and James Ray first met at a Tony Robbins seminar in 1992, where both were participants. Soon after, Caci said, Ray began publishing his self-help books and giving seminars of his own, which Caci attended off and on beginning in 1995.

Caci said he went to the events for help in "personal growth and personal development."

"I just wanted to expand my horizons," he said.

Having attended a previous sweat lodge at a James Ray event in 2003, Caci thought he knew what to expect.

"It was mentioned that his lodges were hotter than normal sweat lodges," he said. "I trusted that he knew what he was doing."

Early on, though, Caci started to feel some adverse effects. He was seated in the back row of participants directly opposite the door flap, arguably the hottest part of the lodge. He said he felt light-headed and even accidentally urinated, but stayed despite his discomfort, never even giving serious thought to leaving.

But before long - his memory of time is somewhat unclear - he realized he couldn't stay. In trying to leave, he forgot Ray's instructions to move clockwise around the lodge toward the entrance.

"I remember the flap opening," he said. "It was either the fourth or fifth round, and I do remember I was woozy. When the flap opened, I went right for the rocks. What woke me up was my hand going in the rocks. It was painful."

Even the sudden shock of the burns to his right hand and arm weren't enough to fully return him to lucidity. And, as he spoke on Wednesday, he became more and more emotional in the face of his broken memories.

"I remember the pain," he said. "I believe I was somewhat crawling out and I believe some people were helping me out.

"I went up to one of the ladies there (outside the lodge) and I said, 'Why is this happening?' Then they sat me down and my arm went right into a bucket of water. I was shaking. I was echoing a few things.

"I can't quite remember what I was saying exactly."

After a bit more time passed, he said, he began to notice the growing chaos around him.

"I remember people coming out and there was yelling and there was screaming," he said. "Although I've never been in one, it looked like a battleground."

Then, despite being advised not to, he went back in for the final round of the ceremony. He still can't say exactly why.

"I've been playing this in my own mind," he said, comparing it to the determination he's felt as an athlete competing in soccer or football. "I guess you want to go back in and support the team."

And, he said, he wanted to finish what he'd started. He wanted to play full on. When he re-entered the lodge, Ray noticed him.

"I do remember him saying to me, we looked at each other and he said, 'This one's for you.'"

He took a different position upon returning and encountered Liz Neuman, one of three people who died after the sweat lodge ceremony, leading to three counts of manslaughter against James Ray. Caci said Neuman's labored breathing reminded him of the last days of his father and brother, both of whom passed away from cancer.

"I saw Liz breathing that way," he said. "I wish I would have said something."

He did manage to help free Laura Tucker, who was trapped underneath Neuman's motionless form.

"I believe someone helped me," he said. "I think we just lifted her a little bit and the lady was able to slide out. She (Neuman) was breathing heavily and she looked unconscious."

Previous witnesses have said that, at that point, others called out to Ray to get Neuman out of the lodge. Instead, they recalled, he replied that "Liz knows what she's doing," and began the final round of the ceremony.

In his testimony Tuesday, Stephen Ray told of how he passed out while trying to leave the sweat lodge and woke up in the hospital. But during his cross-examination Wednesday by defense attorney Truc Do, Stephen Ray saw for the first time medical records from his stay at Flagstaff Medical Center.

Those records are the first concrete indications of what the defense calls a possible "superceding intervening event," hinting at the possibility that the three deaths and nearly 20 injuries participants suffered that day may not have been caused by the extreme heat of the sweat lodge, but rather by a toxin that could have been in the air or in the soil, or even in the scrap lumber that fueled the flame in which the ceremony's rocks were heated.

Caci's testimony and cross-examination are expected to continue today.

James Arthur Ray has pleaded not guilty to the charges against him.

CAMP VERDE - Cody Jones got a call from his best friend James Shore, who was attending a James Arthur Ray seminar in Sedona.

The two remained close even after Shore moved with his family to Milwaukee, where he became CEO of a successful computer company.

The phone call took place a day or so after Shore spoke at an open mic session in James Arthur Ray's Spiritual Warrior Retreat, citing his intentions for the seminar.

"Thank you. I am samurai James Shore. My purpose as samurai is to lead, is to breathe honor and truth with every second of this life.

"To live impeccably is to be in perfect harmony with creation. To be the best of - to live to the best of my abilities at all times. To be impeccable is to continue on the path to enlightenment without distraction, to embrace everything both God and my higher self place in my path as enhancements in my journey and necessary to speed me on my way.

"I give thanks for every moment for all the gifts of life, and I am samurai. As a child of God, I claim my right to ascend to the throne of God and sit between the Mother and Father of Creation as a fully aware and enlightened master."

"James was really full-on about everything, Jones said, adding that the two of them had discovered Ray at about the same time, when the documentary "The Secret" was in popular circulation. Jones was not overly impressed.

"I watched 'The Secret,' Jones said. "To me, it was just ancient knowledge with a New Age twist."

He said his friend likewise had a certain amount of skepticism in him. "He was an open-minded, spiritual kind of fellow. I think he was more interested in James Ray's business in that industry."

During his testimony Wednesday, Lou Caci said he roomed with Shore at the retreat. Caci pointed out Shore's possibly fading level of commitment to what was going on by recalling that, while others were in their rooms or in the dining hall working on their journals, Shore went to the Angel Valley office where he could get on the Internet to do business.

"I think he had to finish a proposal for a major client, if I recall," Caci said.

"James called me two days before he died," Jones said. "He was pretty skeptical about what was going on."

Jones said he understands why Native Americans are upset with the way James Ray has treated many of their most cherished traditions.

"This has raised such a large outcry in the Native American community," he said. "Having those people suffer, for that kind of money and in those kinds of ways, is totally wrong."
Contact
Sign up for our e-News Alerts
Most Read
7 days
30 days