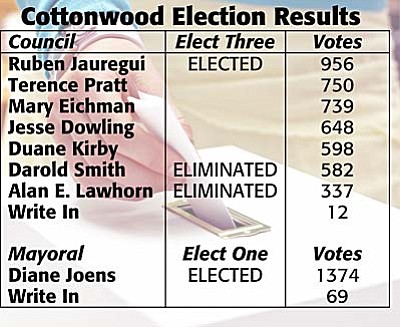 The election will seat Ruben Jauregui as a councilmember and re-elected Diane Joens as mayor.

The election also sets the stage for the May 17 General Election.

Four candidates will face-off to fill the two remaining council seats. Those candidates include Incumbents Terence Pratt and Duane Kirby.

Jiménez says April 7 at 5 p.m. is the deadline for candidates who wish to run in the General Election as a write-in candidate.

As the name implies, a write-in candidate does not appear on the ballot, but any votes would be counted toward their name. Contact the city clerk for more information at 634-5526.

A candidate in Cottonwood's case may only become a write in candidate for one of the two remaining council seats still open, according to Jimenez. Diane Joens has already be re-elected Mayor and Ruben Jauregui has been elected to one council seat.