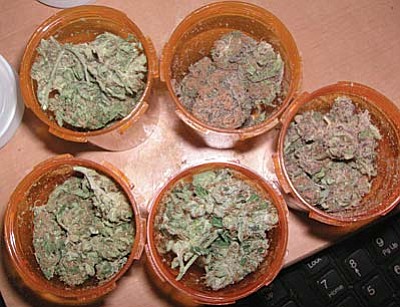 PHOENIX -- Arizonans who act quickly can be among the first to qualify to buy, possess and use marijuana that voters legalized for medical use last November.

State health officials on Monday made the forms available on the agency's web site that a doctor has to fill out to get a patient a medical marijuana card. State Health Director Will Humble said while applications won't be accepted until April 14, those who think they qualify can jump-start the process right now.

And if everything is in order -- and the patients pay the $150 application fee by credit card -- state law requires the medical marijuana cards to be sent out within 10 days.

Legally speaking, there won't be any place for those with the cards to buy their medication. That's because the first official dispensaries won't be licensed until September.

Humble noted, though, state law does allow those living at least 25 miles from a dispensary to grow their own. And with no dispensaries, that means everyone with a card qualifies, at least for the first year.

But Humble found himself at a loss for explaining how these patients will get the seeds or cuttings to get started.

"We're not going to prescribe how you do that,' he continued. "And I really don't have any advice for folks on how to find seeds. Maybe there's ads in the back of a weekly magazine in town for that, too.'

The first step, though, remains that doctor's visit.

Humble said the ideal starting place is a family physician. But he said if that person is unwilling to write a certification for marijuana, then the patient will need to shop around for a physician who will.

He said, though, that should not be the kind of assessment that occurs in some other states, where a quick visit get a doctor's signature on the forms.

Under state regulations, a doctor is supposed to review the patient's medical records for the last 12 months plus due a full assessment and physical related to the medical condition for which the patient seeks marijuana. Humble said that also meals discussing alternate therapies with the patient and the plusses and minuses of medical marijuana, ``really talking to you about what marijuana is, what it can do to your ability to drive a car, for example.'

Once the doctor signs the form, the application process is completely electronic.

Patients must fill out an online form and electronically attach a copy of the driver's license which proves Arizona residency, the physician's certification and a digital photograph, along with the $150 application fee, a level Humble said was set, as required by last year's initiative, to cover the cost of administering the program.

Humble's agency did agree to a 50 percent discount on that fee for anyone eligible for food stamps, meaning gross income of no more than 130 percent of the federal poverty level. That computes out to $1,984 a month for a family of three.

"One of the areas of public comment we got is that the fees were too high, especially for people with limited financial means,' Humble said. But he said that food stamps cannot be legally used to purchase otherwise-eligible items that have been "infused' with marijuana, like brownies or drinks.

Don't look for the state to actually try to regulate prices at dispensaries, though, to keep costs down.

"We just decided that it's not our job,' Humble said. But he said the health department is concerned about costs.

"What we're going to try to do through the rules is set up a robust network of dispensaries and make sure that qualified patients know where those dispensaries are so they can shop around for price and qualify and let the market determine what the ultimate prices are,' Humble explained.

There will, however, be less competition in rural areas.

The rules foresee, at least initially, one dispensary in each of the state's 126 "health analysis areas,' defined roughly by population. That will mean several in large cities, with large swaths of rural areas having only one nearby.

Nothing, however, limits a patient to shopping locally.

The law lists specific conditions for which a doctor can recommend marijuana, ranging from cancer and glaucoma to AIDS and Lou Gehrig's disease. There also is a broader catch-all for any chronic or debilitating medical condition or treatment that causes severe and chronic pain, seizures or wasting syndrome.

But Humble said he can't guess how many Arizonans eventually will qualify for medical marijuana cards. One key, he said, is whether physicians won't provide the kind of time and attention needed to determine if someone is really qualified.

"Twenty or 30 physicians that decide that they're going to line their own pocket and see a patient every seven minutes and don't really care about that patient's medical condition and will sign certifications for almost anything, 30 doctors like that could sign easily 100,000 certifications in a year,' he said. "Many of those we expect to be recreational.'

Those first patients who do get cards -- and get to grow their own medication -- won't be able to just pop some seeds in the ground in the back yard or even set up grow lights in a spare bedroom.

Humble said state law requires a ``secure facility.' For outside cultivation, that means a 10-foot high concrete wall with a metal gate.

And even inside the house, that means a locked room or closet accessible only to the person with the medical marijuana card.