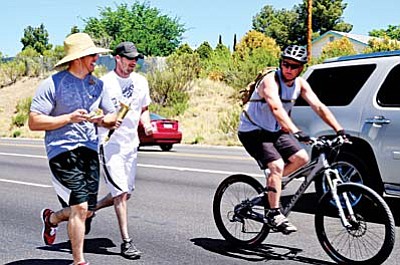 The torch, one of the seven from each corner of the state is bound for Mesa for the Arizona Special Olympics competition which took place Thursday through Saturday.

Arizona Law Enforcement contributes and brings attention to Special Olympics through the run.

The two Cottonwood runners, along with bicyclists Ryan Gildehaus and Cory Savage on mountain bikes, received the torch, made the curve through traffic onto SR 260 for the route to Camp Verde.

Officers Scott Dever and Dan Villas picked up the torch at Goddard Road, at the Verde Valley Fire Station.

Not lost among the officers is 51-year-old Karen, a Special Olympics athlete, who ran from Sedona. Her sister Mary Nunn is assistant coach for the Special Olympics Verde Valley track team. Mary and Head Coach Pam Collins train the 17-track Special Olympians from throughout the Verde Valley who are competing at this year's games. Mary says the athletes are between 20 and 58 years old.