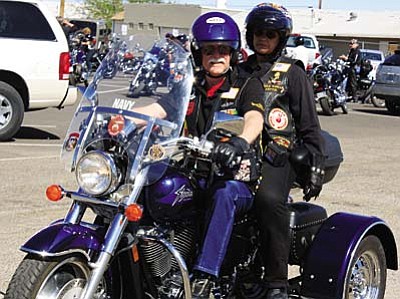 War veterans, who already have given so much for their country, continue to give back with time and money to help other veterans and their families.

Going on two years, Bill Carter has headed up the local chapter, which represents Post 93 in Camp Verde and Post 25 in Cottonwood. During the local group's six years of existence, it has grown to more than 80 members from all over the Verde Valley.

This is not a motorcycle club, it is certainly not a menacing gang, and it is not just a bunch of guys who love their bikes.

"It's that feeling that you know you are doing something right," Carter said. "We're involved in something bigger than ourselves."

The Riders have four to five fund-raising runs a year. These are usually related to veterans' affairs, but there is the occasional special community project like the recent bike run for a Camp Verde girl in need of a liver transplant. You'll also see them in almost every parade.

One of the Legion Riders' central projects is the American Legacy Scholarship. The program provides college funds for children of active duty servicemen and women killed on or after Sept. 11, 2001. There are rides across the country to raise funds.

A typical run by the American Legion Riders of the Verde Valley includes five stops. (Carter prefers these to be scenic sites rather than bars - "I already did my partying days.") For $15 a rider (extra for passengers), they take the back roads through the Verde Valley and sometimes other Northern Arizona destinations.

The Riders come from all walks of life and served in very different eras. There are Korean War veterans, World War II veterans and largely Vietnam War veterans. They are also bringing in Gulf veterans. For many, the only thing they have in common is the brotherhood of military service and the cause of the Riders.

"Sometimes, I'll look in my mirror and see 50 guys riding behind me, and it's kind of emotional," Carter says.

There is also something special the Verde Valley Riders do to express gratitude to current military personnel.

"We Vietnam vets did not get a welcome home," Carter says. "So we decided, "Let's welcome these guys home.' We offer an escort for the men and women home on leave. We get the public involved as much as we can and escort them to the post for a ceremony and thank them for their service."

The national organization was started at a Michigan post in 1993. They had bylaws and an emblem and were intent on furthering the cause of the Legion. Since then, groups have sprung up at posts all over the country to raise money for VA hospitals, veterans relief and children's programs.

The American Legion Riders are a family-oriented organization. Veterans of active-duty military service already have the affinity of the dark days of combat, and the Riders organization offers the opportunity to tighten the bonds that bind with charity work and lots of relaxing trips on the scenic byways.