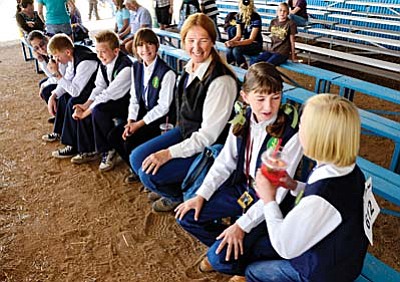 Elaine Anderson at the fair in Cottonwood with students Ruby McFarland and Brynna Vergara.

COTTONWOOD - "Knowing I can leave the community with a Catholic school gives me peace," said Elaine Anderson, sharing her thoughts on retiring from St. Joseph's Catholic School.

Kirkham said that last year the school had it's first four graduates from eighth grade, and two of those graduates started with Elaine. "We are here because of Elaine," he said.

"It was a one-room schoolhouse," Elaine said about St. Joseph's six years ago. She said it was 24 students in a kindergarten through fourth grade Montessori.

In fact, after Elaine graduated from Michigan State University in 1979 with a master's in education, she brought the first Montessori School to Cottonwood in 1980. She was the owner and teacher of the Montessori Schoolhouse until 2000.

After the Montessori Schoolhouse, Elaine went to Accelerated Learning Charter School for four years before founding St. Joseph's in 2005.

In those grade levels, Elaine has been able to see her teaching come "full circle." She is now teaching grandchildren of former students.

Because Elaine believes pre-school and kindergarten are so important to getting children off to a good start with their education, she integrates math, science, geography, history and art into the classroom. She even teaches the youngsters French, and she says French is the second language in her classroom.

Animals have been an important part of Elaine's teaching philosophy.

"I've got over 50 kids in the animal science program," she said. All of them were involved some way in the Verde Valley Fair.

Elaine was a 4-H leader, specializing in rabbits and dairy goats, for 15 years. She has been on the board of the Verde Valley Fair Association for 20 years, and she has served as superintendent of small livestock for 10 years.

Now Elaine will keep working with her animals in retirement. "I want to keep milking my goats and making my cheese," she said. Elaine has a huge garden, and she produces soft goat cheese as well as cheddar and feta cheese.

Beyond gardening and milking goats, Elaine also is seriously considering moving to Europe. "I did a lot of teaching in Europe during summers," she said.

Three years ago, Elaine and her daughter, Kira, took a 300-mile backpacking trip through the South of France. She said she found small villages there that are still on the barter system.

That struck Elaine as possibly the perfect place to continue her gardening, goat milking and cheese making.

"There's a good chance we'll move to the South of France," Elaine said.