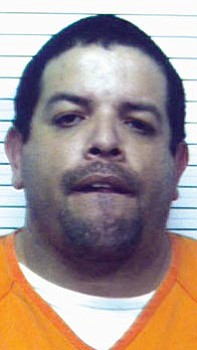 RIMROCK - Yavapai County Sheriff's deputies arrested Delayno Randall, 38, of Rimrock early Monday on charges including assault after a woman told deputies Randall struck her in the face and pushed her into a wall.

Randall later fled in his car from deputies on I-17, according to Dwight D'Evelyn, spokesman for the Yavapai County Sheriff's Office, who added that Randall remains in custody on a $12,500 bond.

Just after midnight, deputies answered a call about a family fight at a home in the 4500 block of Ghost Rider Way in Rimrock.

The caller told deputies Randall struck her after an argument, D'Evelyn said.

The woman told deputies that as she ran towards the front door, Randall grabbed her hair, broke items in the home and pushed her head into a wall, D'Evelyn said.

The woman broke free, got into a car parked in a garage and locked the doors, D'Evelyn said.

While the woman was inside the car on the phone with YCSO, Randall tried to break out the car's windows, D'Evelyn said.

Four children were inside the home during this incident, D'Evelyn said.

As deputies approached Beaver Creek Road, they saw the Dodge Neon pass them and enter northbound I-17.

Deputies followed Randall's car, which crossed over the fog line and rumble strips on I-17 at least five times, D'Evelyn said.

A deputy activated his emergency lights and siren, but Randall did not stop. Instead, he continued north on I-17 at speeds up to 100 miles per hour, D'Evelyn said.

Randall slowed the car to about 80 mph as it passed the Highway 179/Sedona exit and, at milepost 301, the car suddenly pulled into the emergency lane and stopped, D'Evelyn said.

Randall opened the driver's side door but did not get out of the car, D'Evelyn said.

When deputies approached, they saw Randall on his cellphone, smelled alcohol on his breath and arrested him without incident, D'Evelyn said.