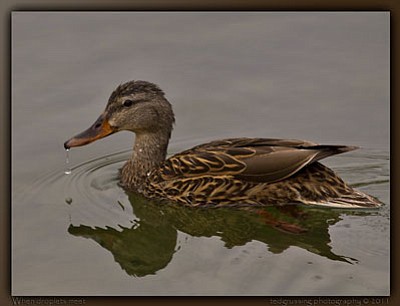 At least it seems like I am trapped, but perhaps it is more accurately described as captivated by the depth of beauty in the Iris blooms. Today on the way into town we stopped at Marge's and got some shots of her iris blooms. Because of the overcast skies the light was quite diffuse which confirmed the advice I got from fellow ISO 100 member Doug to reduce the contrast between highlight and shadow in my flower shots. With the overcast sky I didn't have to use any mechanical means of doing it. Thanks Doug! The iris blooms will be gone in a few weeks and in the meantime I'll be getting as many shots of them as I can.

After we finished our business in town we took a run down to the ponds to see what wildlife was hanging out down there. Got some new ones of shorebirds, a muskrat and others, but the one I liked best was this one of a small hen mallard who stayed close to shore and is in the process of making a nest; she does appear to be the one I featured in a previous email with her escapades with a couple of drakes. The drop coming off her beak and the mirror image of it in the water intrigued me and hope you enjoy the photo too,

The coffee pot has been moved up once again to 6AM; Q's day starts then and by default mine too. I know it is wise for me to rise, as I have seen that video where when walking on the dad, kneading his tummy and all other gentle methods of rousing him failed, the cat took a baseball bat and whacked him over the head and put on an innocent look when he woke.

So have a wonderful day, be blest and be a blessing to others.

Today
From above
Sedona Pathways: Our Daily Journey April 12, 2017
Gentle
a day