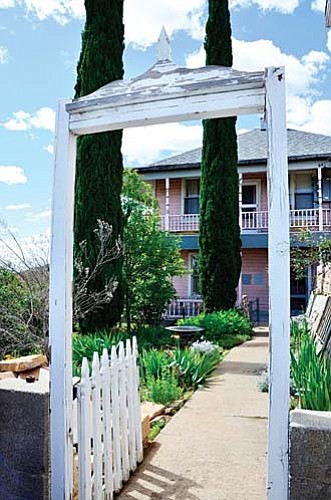 Plans are under way for the 46th annual Jerome Historic Home and Building Tour May 21-22. This longest running tour in the state of Arizona promises a look at both the historic gems of this charming town and a recently completed Jerome home built with a look back in time.

Tickets will be sold on Main Street, right in the center of town at the old firehouse and cost $12 for adults and $6 for children.

The first tickets are sold at 9 a.m. and the final tickets each day will be sold at 3 p.m., leaving two hours for latecomers to get through the tour by 5 p.m.

This is a guided tour with transportation provided from home to home. The all-volunteer docents will explain the history and the fascinating stories behind each venue.

There are plenty of steps and winding paths so the tour will not be handicapped accessible.

This year's tour includes a three-story original home that is known as Lil's Place, named after the madam of the brothel that was housed here.

Astonishing views from the porch and the ruins of an historic building at its rear wall beg the viewer to bring along a camera. The Williams home will be shown for the first time as the new owner prepares for a major renovation of this quaint home.

Over the years, layers of roofing shingles have been added to the exterior walls of the home, giving it a camouflage appearance. The original sleeping porch has a view of the entire Verde Valley.

The Anderson Home, now owned by Glendale residents, has been lovingly restored to truly capture the feel of the early 20th century and is filled with antiques and artifacts from Jerome as well as family finds.

Two side by side multi level homes, one old and one new, will offer a look at life in Jerome past and present.

The Wingfield Home was built in 1904 by James Wingfield. His family is associated with the early days of Camp Verde.

The next owner of the home was George Maglich who worked as a shift boss running the pumps at the mine. Daughter Katie Maglich married into the Groseta family, well-known ranchers in the Verde Valley with deep roots in the local community.

Andy Groseta, Katie's son, used to visit his grandmother at this home in the 50's and remembers making wine in the basement and going up the street to the Thornbeck Bakery. He also remembers the front room on the second level was his Aunt Ann's beauty shop. Downstairs, boarders slept and came up for meals.

Years later, Laura Campbell, an artist, began a detailed renovation with the help of current mayor Jay Kinsella. Today, this home is a modern mix of old and new and a delight to the current owner who lives in Phoenix and uses the home as a welcome getaway.

A total of seven homes and one public building will be on this year's lineup.

For more information, contact the Jerome Chamber of Commerce at 928-634-2900 or visit jeromechamber.com.