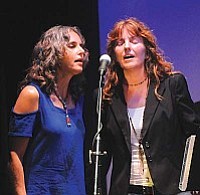 COTTONWOOD -- It's 70 candles for Bob Dylan.

The sixth annual Bob Dylan Birthday Party & Concert will take place Saturday, May 21, 7 p.m., at the Old Town Center for the Arts in Cottonwood.

"The show has grown enormously," says Joe Neri, the show's producer and co-owner of The Well Red Coyote bookstore, "starting out in 2006 as a small acoustic show in our bookstore and evolving into a major stage show at the Old Town Center for the Arts. We sold out last year and I expect the same this year. We have some new talent that should make it even more exciting and entertaining than previous shows."

Neri and the Mystery Tramps, his backing band for the Dylan shows, will be joined by a long list of some of the best musicians in Northern Arizona - Alexander, Tyler Barrett, Decker, William Eaton, Gregg Gould, Vyktoria Pratt Keating, Chris Seymour and Don Whitcher, as well as popular poet and Dylanophile Gary Every.

The Mystery Tramps are Neri on vocals and guitar, Debra Windsong on harmonica, Dan Bresnan on lead guitar, Alexander on keyboard, Hutch Hutchinson on bass and Robert Church on drums.

Every show has been different, with hundreds of Dylan songs to choose from, and every show is full of surprises. One very popular part of the show for the past four years, and will definitely be included in this fifth annual show, is an audience participation singing of "Desolation Row," with Neri singing the first two and the last verses of this 10-verse Dylan epic and individual members of the audience coming on stage to sing the middle verses.

"And, we always sing "Happy Birthday" to Bob Dylan, and then break for birthday cake," says Neri, whose own birthday falls on the same day as the legendary bard.

"There's a very special feeling that's shared by the entire audience, from revisiting these classic Dylan tunes," OTCA co-director William Eaton remarked. "Joe Neri and the Mystery Tramps" are great, they've made this event a real tradition for Northern Arizona."

Tickets are available online at showtix4u.com or in Cottonwood at: Jerona Java Café, and Desert Dancer; and in Sedona at: The Well Red Coyote, Crystal Magic, and Golden Word Bookstore.

Old Town Center for the Arts is located at 5th Street & Main in Old Town Cottonwood.