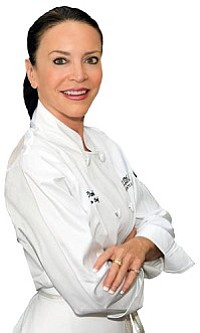 SEDONA -- The Elixir of Life Cookbook by chef and author Lisa Dahl has been awarded the 2011 Gold Medal IPPY Award for Cookbook of the Year. Lisa will accept the award in New York City May 23, 2011, during a week of festivities in conjunction with Book Expo America.

The "IPPY" Awards, launched in 1996, are designed to bring increased recognition to the deserving but often unsung titles published by independent authors and publishers. More than 4,000 total entries were submitted to independent publishers in 2011.

Established as the first awards program open exclusively to independents, over 2,500 "IPPYs" have been awarded to authors and publishers around the world.

In The Elixir of Life: Finding Love and Joy in the Passionate Pursuit of Food, Lisa Dahl travels to Tuscany, Italy, to celebrate the elixirs of the olive and the vine, and the elixir of inspiration that underlies her decades of Italian- and Mediterranean-influenced cuisine.  She brings them home to Sedona, Arizona, where she is the executive sous-chef and co-owner of award winning restaurants - Cucina Rustica and Dahl & Di Luca Ristorante Italiano.

Lisa's interpretation of lusty, rustic, direct Italian cooking includes, soups, salads, sauces, versatile side dishes, and delicious antipasti. The recipes in this book feature vibrant components that can be interchanged, recombined, and seasonally adapted for soul-satisfying family meals and easy home entertaining. Many are friendly to vegetarian and vegan lifeways. All are intensely flavorful. This is a book of beautiful, healthful, and joyful elixirs that will enhance your life.

The book is a showcase of beautiful food and travel photography. Unique in every way, the book also includes a 22-minute DVD that leads you down the road less travel in Tuscany and then to Sedona. The visual journey is enhanced with nine original tracks of music produced for the DVD.

Eighty recipes are shared with simple ingredients and preparation style. Unique in every way, the chapters of the book illustrate Lisa's sous chef approach to; starters, soups, salads, sauces and their friends and side dishes.

Lisa's first book The Elixir of Life cookbook was recently endorsed by Deepak Chopra, quoting, "When you cook with love you feed the soul."

For Lisa, cooking is a way of life. It serves as a remedy for life's unexpected nuances and as a means for daily meditation. Lisa incorporates this into her personal recipes, which she is now sharing with the world in, "The Elixir of Life" her new cookbook. The cookbook focuses not just on Dahl's skillfully crafted cuisine, but life experiences that have been the viable inspiration for her recipes.

Following her success as a restaurateur, Dahl wanted to share her passion for nature's organic goods with others, by distributing a taste of her own culinary art form. By means of her cookbook, "The Elixir of Life," she can distribute the joy that Italian cuisine and fresh produce creates in her life.

Dahl takes the reader on a tour of Tuscany, Italy, followed by a warm reception in the red rocks of Sedona and the inner pathways of her soul.  It is an in-depth look into the life, experiences and inspirations that shape an Italian chef.