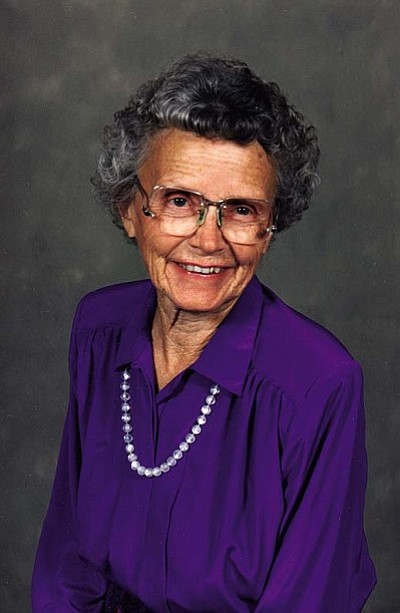 Born Sept. 29, 1916, to Pearl and Everett Jordan in a ranch house near Camp Verde, Arizona, Shirley’s family made their living raising chickens and selling meat and eggs to surrounding communities. Shirley fondly remembered the trips she took with her father in their horse and wagon making deliveries to the mining city of Jerome.

The house where Shirley was born is now occupied by a close friend. In her later years, Shirley had opportunities to sleep overnight in the same room she was born in. She always got a kick out of doing that.

Shirley’s early education was at the one-room school house near Clear Creek, which is still standing. She completed high school at Camp Verde in 1934.

Shirley attended Tempe State Teachers College (now Arizona State) with her sister Dale where they both graduated with teaching degrees. During World War II, Shirley moved to Dayton Ohio where she met, and married, Horace Ohmer.

After the war, Horace took a job as a personnel manager at Convair in San Diego. In December, 1959, he died of a sudden illness. Shirley moved back to Camp Verde with her two boys, then 9 and 14 years old. Shirley had a house built on property near her mother and lived in that house, located at the end of Boyer Lane, for 40 years.

After returning to Camp Verde, Shirley renewed her teaching certificate and took a position at Camp Verde High School where she taught Home Economics for many years. During this period she married Dave Hopkins. Sadly the marriage didn’t last but they remained friends until Dave’s death.

After retiring from teaching, Shirley eventually moved to an apartment at Cottonwood Village and from there she moved to a retirement community near Denver to be close to her son Chuck.

Shirley is remembered for her sense of humor, kindness, and especially her care for other people. She will be missed.

Shirley was preceded in death by her parents, brother Horace, and sisters Dale and Kathryn. She is survived by her two sons Chuck Ohmer and his family, wife SonAe, daughter Starlene Cook and son Chuck Ohmer Jr.; Craig Ohmer and his wife Karen; niece Robin Rucker and her family; and nephew Brian Strong and his family. Earlier this year, Shirley was able to meet her first great grandchild, Vesper Cook, who was 6 months old.

Shirley will be buried next to her husband, Horace Ohmer, at Fort Rosecrans National Cemetery in San Diego. The service will be held at Rosecrans on May 20, 2011. Arrangements have been made by Drinkwine Family Funeral Home in Littleton, Colo.