2011: A slice of history and a good time, too, in Old Town Cottonwood 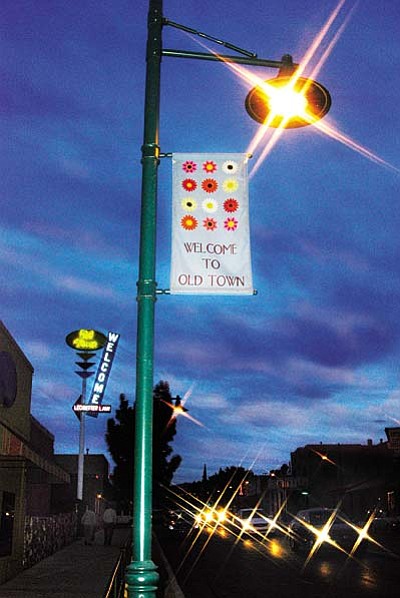 As other Verde Valley communities, Cottonwood embraces a rich share of history. The region has long been home to Native Americans, especially the Sinagua, Yavapai and Apache. The first Anglo settlers farmed and provided goods for the soldiers at Camp Verde and for the miners in Jerome in the late 1870s.

William Clark and Jimmy Douglas developed major smelters and the mining communities of Clarkdale and Clemenceau, respectively, during the mining heyday of the early 1900s,

Clemenceau located near Willard Street and Mingus Avenue was a complete company town with thousands of residents, a school and other facilities. Mining companies closely regulated commerce, industry, employment and even housing opportunities in Jerome, Clarkdale and Clemenceau.

Old Town Cottonwood became a haven for those seeking to be free from the prejudice and regulation. Main Street was created in 1908 when Charles Stemmer and Alonzo Mason used a mule team to drag through the brush. The Mason Addition, Willard Addition, Hopkins Ranch No. 2 and other tracts were platted during the coming decade coinciding with the development of Clemenceau one mile to the south on higher ground. The Clemenceau smelter closed on December 31, 1936 with a loss of jobs and disruption to the area’s economy.

The Old Town, dormant for years after the mining collapse, has welcomed a revival of new restaurants, gift shops and a streetscape project that improved lighting, parking and walking opportunities. Old Town has a quaint character and colorful 20th century Old West past. It was a bootlegging center and a popular movie location.

Visitors will notice the high sidewalks and period architecture. They should also look up when they are in stores and eateries.  Many of the ceilings are beautiful examples of elaborately hammered tin.

The Cottonwood Hotel (circa 1925) at 930 N. Main, the oldest hotel in Cottonwood is listed on the National Register of Historic Places. With apartment-style lodging, the five-unit hotel once housed many famous guests including Mae West, John Wayne, Gail Russell and Elvis Presley, who shot films in the area.  Many buildings have stories to tell. 1060 Main Street used to have underground cellars for storing moonshine. The Cottonwood Civic Center was built by the WPA in 1939 and the women of Cottonwood raised money to buy the materials.

One of the newest and most popular attractions in Old Town is William and Christine Eaton’s Old Town Center for the Arts, located in a historic church building at the corner of Fifth and Main streets. OTCA plays host to more than 20 concert events each year and has attracted such national acts as John McUen and The Grascals.

The Old Town Association’s Visitor Center at 1101 Main St. was once the county jail.  Its two metal-enclosed cells were built in 1929 to contain bootleggers and sometimes held up to a dozen people. The jail continued to be used until the 1970s.

Curious visitors can view the cells, pick up a handy map or refresh themselves.

Just outside the visitor center is the Jail Trail, a lush one-mile riparian walk with many rare plants and nearly 20-threatened or endangered animals, including the river otter and southern bald eagle.  The road connects with the Verde River Greenway and Dead Horse Ranch State Park.

Every Thursday evening from July through the first week in October, Old Town Cottonwood hosts a Farmer’s Market in the old ball field behind City Hall. The event features produce, handcrafts and a live band.

The annual Chocolate Walk is among attractions during the first week in December.  From time to time, Old Town merchants hold other festivals, including salsa tasting, a water to wine festival and art walks.