Mingus has something to prove in first round of playoffs 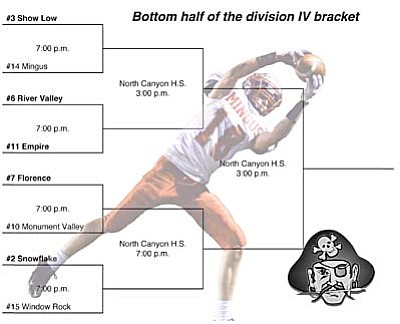 <b>Evan McFarland</b> behind the bottom half of the AZ division IV playoff bracket. VVN/Sean Morris

COTTONWOOD-The Mingus football team didn't get the results in the regular season they wanted, but they squeaked into the playoffs at 5-5.

They were 5-3 after week 8, but they lost the last two games of the season to division IV No. 2 Snowflake and division V No. 4 Camp Verde. A ball bounce here or there and they could have won those two games, but slow starts and costly fourth quarter turnovers in both contests deflated surging campaigns.

When they travel to Show Low Friday to take on the Cougars for the first round of the division IV playoffs, they can silence the disgruntled grumbles of a spoiled local football culture with a win.

Some have claimed Mingus has a shot to win because of the strong history of the program and playoff experience, but that's not true. The Marauders can win Friday because they're backed into a corner and they have nothing to lose.

Arizona high school football coaches and analysts recognize Mingus is good enough to be in the playoffs. Their strength of schedule was tough, and their record reflects that, but they're lucky to be in the postseason.

It's a good thing and a bad thing Mingus only played five teams from division IV this year. It's good because they got to keep games against Bradshaw and Prescott (two rivals), and they got to renew a rivalry with Camp Verde.

It's bad that Mingus didn't get to play more teams from division IV because we weren't able to see how they really stack up against the competition. Mingus went 3-2 in division IV games, but their only losses were to the top two teams: Blue Ridge and Snowflake. They only lost by three to Snowflake, so it's logical to think they have a good chance against No. 3 Show Low.

Playing the underdog spoiler in the first round is uncommon for Mingus, but if they come focused and take care of the football down the stretch, they can upset the defending 3A Conference champions and salvage the season.

Then they'll be playing with house money. Stranger things have happened; last year No. 12 Thunderbird won the 4A II championship. Mingus has a shot and that's more than a lot of teams can say.

A cold front is moving in over Northern Arizona, and Show Low has a 90 percent chance of precipitation Friday night, snow likely. Wind expected to blow 30 mph. It's gunna be nasty. That will limit the effectiveness of the passing game immensely.
Contact
Sign up for our e-News Alerts
Most Read
7 days
30 days