Clarkdale Classic Station: The only copper-sided Texaco station ever built 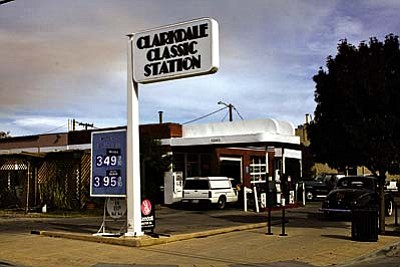 CLARKDALE – There are sights and sounds around the Clarkdale Classic Station on Main Street that visitors to the town’s business district – unless they are 30 or older – likely have neither seen nor heard.

The sound – a bell inside the service bays -- comes first. It can be heard from almost anywhere in the business district. It is heard each time a car pulling up to the station’s gas pumps drives over a long black hose snaking back into the service bays.

That black hose was ubiquitous back in the day, the day when full-service gas stations were everywhere. It signaled the attendant inside that another car was at the pumps waiting for service.

It is that service – also from back in the day – that gives people unfamiliar with Clarkdale those sights not often seen during recent decades. The sight of an attendant actually putting gas into the vehicle.

There are other sights from long ago taking place at the Clarkdale Classic Station. The owner, Micheal Hensley, or one of his employees are seen from time to time checking customers’ oil, or washing windshields, or even checking tire pressure.

Just the sight of service bays – doors wide open and filled with vehicles either sitting high on a lift or with their hoods raised – is an anachronism: a business selling gasoline and service instead of gasoline, Pepsi, Twinkies and Lottery tickets.

Linda Anderson, local historian and bookkeeper for the station, said Micheal is only the second owner of the station to own the business, land and building. A. Roy Bennett was the first, and he bought it in November of 1976. He changed the station from Texaco to Exxon.

Micheal explained that Texaco, in conjunction with the mine, built the station. “That’s why the copper,” he said.

The station was originally built with copper siding. “It is the only one ever built,” Micheal said.

Since buying the station, Micheal has been using power washers and acid to get back to the original copper siding. That work is still in progress, and it has involved going through several layers of white paint and one layer of plastic stucco.

According to Micheal and Linda, M.O. “Bud” Lindner Sr. was the first lessor.

Linda said the history of the station has been difficult to track. But she has uncovered much information. She said the building was designed by Walter Dorwin Teague, who was a well-known designer, credited with designing the Brownie Camera for Kodak.

“This was the only commercial building in Clarkdale that was built by Phelps Dodge,” Linda said. “Everything else was already built by United Verde Copper Company.”

She explained that people were allowed to own a business, but not the building or the land.

When P-D decided to close the smelter, they started selling off some of the homes in Clarkdale. “But they held on to the businesses,” Linda said.

“But they weren’t interested in the business district,” Linda said of Allison Steel.

After Allison took what it wanted of the smelter, the company sold the business district, and some of the town’s homes, to Earl Halliburton. “Halliburton owned this town,” she said.

A photograph of the station when it was built in 1942 shows Bud Lindner’s son, 15-year-old Bud Jr. standing in front of the pumps with his dog, Caesario. Bud Lindner Jr. went on to become the first mayor of Clarkdale.

A succession of six owners ran the station while it was a company business and before it was sold to the first private owner in 1976. During that time, Clarkdale Realty Company was selling both homes and businesses in town.

The station was placed on the National Register of Historic Places Jan. 8, 1998, as contributing to the Clarkdale Historical District.

But it is still a working station.

“We’ve always been full service,” Micheal said. “When I bought it, I put the bell back in.”

And, yes, Micheal says he and his employees still check oil and tires. “We’ll clean your windshield,” he said.

In the service bays, Micheal still offers full mechanic services. “I do everything,” he said. “I’ve been a mechanic for 40 years.”

Micheal said he makes no money at the gas pumps. His profits come from the service bays.

But the gas pumps are still an important part of the service that Micheal and his employees offer. The pumps are from the mid-to-late 1950s. Their design prohibits customers, by law, from pumping their own gas.

Micheal and the Clarkdale Classic Station are not aligned with any major oil company – not Texaco, not Exxon. He is proud to be independent.

“I’m the only one in the valley that sells Clear Premium,” he said.

Clear Premium, Micheal explained, has absolutely no additives. It can be used in airplanes as well as automobiles. He said that without additives in the fuel, customers’ vehicles will get better mileage.

“I’ve done that since I‘ve been here,” Micheal said.

Micheal is proud of the historical value of his full-service station. He is also proud of the connections the station makes possible.

“Three of my employees’ fathers worked here when they were 16,” he said.

The Clarkdale Classic Station is located at 924 N. Main St.