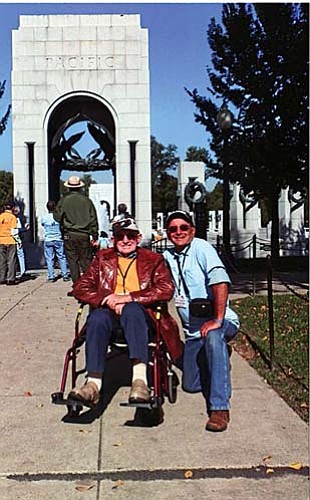 Sterling “Scotty” Scott of Cottonwood will be 89 in January. He recently was the guest of the Honor Flight Network that took him and a guardian to visit war memorials in Washington, D.C. with all expenses paid.

COTTONWOOD - "It was an honor, like you would not believe," said Sterling "Scotty" Scott, who will turn 89 in January. He served in the U.S. Marine Corps. in the South Pacific during World War II.

The "honor" that Scotty is referring to was the recent Honor Flight that took him, and his Honor Flight Guardian Stan Makow of Clarkdale, to visit the WWII Memorial in Washington, D.C.

The Honor Flight Network is a non-profit organization dedicated to providing free flights to America's veterans to visit the war memorials and other points of interest in Washington, D.C. and the surrounding area. Because about 200 WWII veterans are dying each day, the priority now for the Honor Flights goes to the veterans of that war.

The veterans are accompanied by guardians who help them make the flight and visit the memorials.

Scotty and Stan are from American Legion Post 25 in Cottonwood. Stan, from Clarkdale, is a U.S. Army veteran of the Vietnam War.

"In this post there are only four World War II veterans," Scotty said. "The other three, their health was not good enough to go. So, I had the honor of going."

In addition to the WWII Memorial, the veterans got to visit the Lincoln Memorial, the Washington Monument, and memorials for the Korean and Vietnam wars.

For Scotty, the most impressive and emotion site to visit was the World War II Memorial - his war.

"It was a tear-jerking thing," he said.

Scotty had actually seen the memorial during the groundbreaking ceremony. "But there were so many people, I couldn't get within 600 to 700 yards," he said.

Being up close on his Honor Flight visit to the memorial had an impact on Scotty. "It's hard to say how you feel about all the stuff I've been through during World War II as a sniper," he said.

He knows it took a fair measure of luck for him to be standing at the memorial all these years later. During his almost four years in the Marine Corps, Scotty fought in four major battles of the Pacific War, including the Battle of Guadalcanal and the Battle of Saipan.

On Friday the 13th of October 1944 at 6 a.m., Scotty was wounded six times. His hand was partially paralyzed, and the wounds were enough that he was transferred back to the United States.

Stan said that 27 veterans from Arizona were accompanied by 30 guardians on the Honor Flight. He said, "It was an honor," for him to accompany Scotty.

Seeing all the memorials for the first time had an emotional impact on Stan as it did on Scotty. "It shook me up, too," he said.

"One highlight was the Arlington National Cemetery," Stan said. "We also got to see the Tomb of the Unknown Soldier."

Stan said there are 320,000 graves at the Arlington Cemetery.

"There must have been 600 people meet the plane," Scotty said.