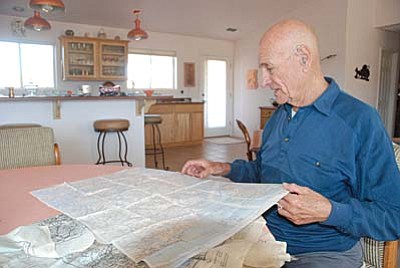 Camp Verde resident Dick Schmidt displays the collection of maps he was issued during the war. Although nicely printed on cloth he says they were not very accurate.

On each missions he flew one of America's premier fighter aircraft-the twin engine, twin tail P-38.

It was the aircraft used by two of America's greatest aces of World War II, Richard Bong (40 victories) and Thomas McGuire (38 victories).

Of the 50 flights, 49 of them were flown alone. He never had an escort and no one was around to cover his wing.

And he flew them all totally unarmed. He never dropped a bomb, never engaged an enemy fighter, never fired a shot. His only weapons were the plane's ability to fly high and fly fast...and the cameras.

Schmidt was a pilot with the 21st Photo Reconnaissance Squadron, headquartered out of Kunming, China. His only job was to photograph the enemy-their airfields, ships, supply depots, ammunition dumps, troops, convoys and anything else high command felt was worth a look.

As helpless as he was in the air he says he never gave it much thought, at least at the beginning.

"We didn't know better. The first 35 missions didn't matter. You were young and you were going to live forever. But the last 15 missions, after you had seen your fellow pilots leave and never come back, there was a certain amount of tension."

Alone in the early hours of the morning he and the members of his squadron would set off for targets up to 1,200 miles from base, places like Hong Kong and Formosa.

Typically they flew above the fray, but one day, on a flight over Shanghai, he was jumped by a Japanese fighter. Schmidt says he disposed of his two 300-gallon drop tanks, dove to gain speed and then proceeded to outrun his pursuer for 200 miles.

But of all his flights his most memorable was one he took shortly after arriving in Kunming-one that didn't count-one that would make his journey back to the United States longer than it should have been.

"It wasn't even a mission. I went out to just enjoy what the plane could do."

And what the plane could do is fly about 450 miles an hour.

"The only problem with flying the P-38 is we always flew high. And if you have ever flown in a jet you know that from 30,000 feet, 400 or 500 miles an hour isn't very impressive. But 50 feet off the ground it's absolutely thrilling."

About five miles from the base Schmidt spotted a lake. He dove to treetop level then tore out across the lake.

"At the far end of the lake was a house. When I reached it, I pulled up, blowing off a few shingles as I went by."

When Schmidt landed back at the base he was met by the squadron commander who spent a good deal of time chewing him out.

"He was mad as hell. It turned out it wasn't just any house. It was a retreat for senior officers who were on R and R (Rest and Relaxation). Apparently there was a colonel sitting on the front porch who wasn't impressed."

Schmidt was temporarily assigned as co-pilot on a C-46 cargo plane before he was allowed to get back in his cherished P-38.

"The commander said that if I wanted to see China he had just the thing for me."

But his punishment wasn't over.

Fourteen months later, after he had completed his mandatory 50 missions, Schmidt was forced to stay in Kunming for an additional two months, serving as a flight leader for new recruits and waiting for his captain's bars.

"It seems I wasn't in anyone's good graces," he says.

Then, when he was free to leave, it would take him nearly a month to get back home.

"After they cut my orders, it was up to me to bum a ride home. But most pilots made you have your own parachute. It took me 10 days to find a parachute and a ride home. They were both being sent somewhere for repairs, but I didn't care."

When the plane hit 15,000 feet he realized he didn't have supplementary oxygen and ended up sharing a crewmember's oxygen mask. In India it took another week to find a flight. Over North Africa he shared the back end of a cargo plane with a dozen airsick infantrymen.

The agonizingly slow ride home changed his views on flying.

"The P-38 was the sweetest plane I ever flew. Its power and speed were just incredible. I never flew another aircraft. I just couldn't see myself flying a piper cub."