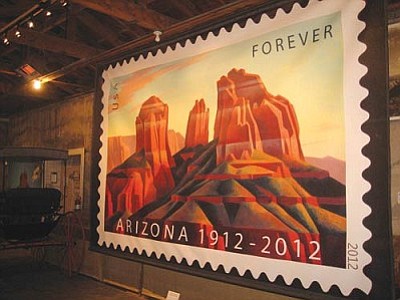 The U.S. Postal Service has unveiled a first-class "forever' stamp commemorating Arizona's Centennial in 2012. The Sedona Heritage Museum is displaying the 10-by-15-foot banner unveiling the design for the commemorative stamp.

Ed Mell, a native Arizona artist and a stamp collector in his youth, created the stamp design, depicting Cathedral Rock in Sedona. "I actually tried a few different directions before I settled on Cathedral Rock, which I really felt was an icon of Arizona," Mell said in an interview. Mell said this assignment was a dream come true.

Karen Churchard, executive director of the Arizona Centennial 2012 Foundation, said U.S. Postal Service representatives asked centennial organizers going in what they didn't want on the stamp. Their answer: the Grand Canyon and saguaro cactuses, which they considered overused. Mell said the oil painting took him about three weeks to complete.

He worked in a style that combines abstract and realism. He started by taking a photo of Cathedral Rock and developed pencil sketches before producing the final work on a 20-by-30-inch canvas.

The original painting now belongs to the Postal Service, and the stamp will officially become available on Arizona's Statehood Day, Feb. 14, 2012.

The banner will be on display at the Museum until late December.