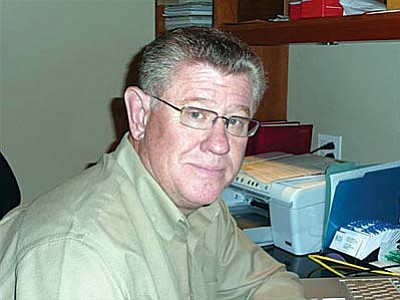 COTTONWOOD - In a split vote, the Mingus Union School Board voted Thursday night to approve a part-time contract next year for Superintendent Tim Foist. In another vote, the board voted unanimously to enter into meetings with Cottonwood-Oak Creek School District to discuss the possibility of sharing services, including a single superintendent.

The vote on Foist's part-time contract was split 3 to 1, with yes votes from James Ledbetter, Anita Glazar and Brenda Zenan, and one no vote from John Tavasci Jr. Board member Mike Mulcaire was not present.

The decision to approve a part-time contract for Foist started with a white paper report he prepared for the board. Among other recommendations, Foist requested the part-time arrangement. The discussion on Foist's request was tabled during the October board meeting to be discussed during the November meeting.

Board President Ledbetter started the discussion on shared services by explaining to the board that Mulcaire had spoken with C-OC Board President Randy Garrison about holding meetings to discuss sharing some services, including administrative services.

Ledbetter said he thinks sharing services is a great idea, but he said, "We're a little ways out on the shared superintendent."

He said this time, the two districts should get someone from the outside to be involved. Ledbetter said that using a third party in the process brings in someone "who doesn't have a dog in the fight."

Ledbetter said the two boards must go into this thoughtfully. "We need to approach this very systematically."

"I'd hate to see this thing be beaten to death again by process," Tavasci said. He also suggested that meetings in which personnel issues are discussed should be held in executive session.

Tavasci also made reference to the break down in communications and discussions during the last round of meetings the two districts held on unification. He said there were a lot of factions against consolidation. Those same factions will come around again, he said.

When the discussion turned to Foist and a part-time contract, Ledbetter explained that under such a contract, the district would save money by having its superintendent working part-time. He said Foist would be in district some of the time, but he also would be out of district for several months of the year.

Ledbetter said he thinks the two districts are at least a year off from having a single administration. "I would like to have Mr. Foist under contract for one more year."

"I agree," said Ledbetter. "But I think it sends a different message." He said it would send a message that Mingus is willing to operate with a part-time superintendent.

Zenan said a part-time contract only takes a shared superintendent off the table for one year. "This is only a one-year contract we're talking about," she said.

Tavasci disagreed. "If we're going to hire Tim for one year, there is no point in going to this meeting," he said. "Let's have this meeting before we offer a contract."

Ledbetter pointed out that the goal is to save money, and Mingus has a superintendent willing to work part-time.

"It can't wait until after this meeting?" Tavasci asked. "He isn't going away. We can offer him a contract after the meeting."

Tavasci was adamant about explaining that he isn't against Foist's contract. He said he thinks Foist is one of the best superintendents he's ever seen. His reluctance had to do with the timing of the vote, not the part-time contract.

Ledbetter made a motion to proceed with meeting on shared services. He also said Clarkdale-Jerome School District should be contacted to see if they would join the meetings. "Who knows`, maybe Sedona is interested," he said.

Passage of Ledbetter's motion was followed with a motion by Tavasci to table any action on Foist's contract. The motion died for lack of a second.

Zenan made a motion to approve the part-time contract with Foist. It passed.

Details on Foist's contract, such as salary, are yet to be determined, and a date for the first shared-services meeting between the two districts is yet to be set.