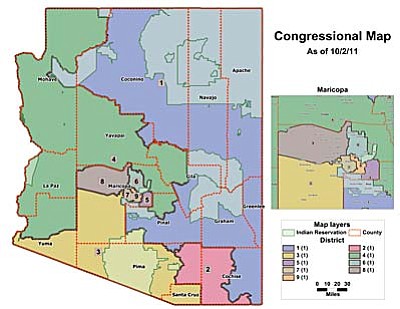 A newly proposed map of Arizona's congressional districts would throw most of Yavapai County into a rural district dominated by Colorado River communities.

Labeled as the 4th Congressional District, it would be a wide-open district in the 2012 election, since it appears no incumbent U.S. representatives live within its boundaries, unlike the other eight proposed districts.

However, CD4 wouldn't be wide-open to Democratic candidates since it has a huge Republican majority - 18 percent over Democrats.

Nearly all of Yavapai County currently is in the large rural 1st Congressional District with most of the north-central, northeast and east-central part of the state. Paul Gosar of Flagstaff is its U.S. representative.

Under the draft map proposed Monday by a narrow majority of the Arizona Independent Redistricting Commission, all of Yavapai except a small eastern portion would move to the 4th Congressional District (CD4).

But left out would be Camp Verde, Sedona and Lake Montezuma in the Verde Valley, which all would stay in CD1. And CD1 would be leaning more strongly toward a Democratic district, with a 9.5 percent edge for Democrats over Republicans, compared to the current CD1 edge of 3.8 percent.

Verde Valley residents who spoke at the only Redistricting Commission hearing so far in this county said they'd prefer not to be in a district with Prescott.

Yavapai County Republican Chair Mal Barrett Jr. said the county needs to stay in one district because it is a community of interest, one of the main requirements of new districts under the 10-year-old law that took redistricting powers away from the Legislature.

Along with parts of all the Colorado River counties and Yavapai, the draft map also puts portions of Pinal, Gila and Maricopa counties into CD4. Communities in those counties that fall into CD4 include Fountain Hills, Payson and Apache Junction.

Barrett doesn't mind being in a district with the Colorado River counties, but doesn't like the overall map the Redistricting Commission created.

"I think it's been grossly gerrymandered to benefit Democrats," he said.

The latest voter count shows that 35.5 percent of Arizonans are Republicans and 31.1 percent are Democrats. The draft congressional map gives a strong edge to Republicans in four districts and Democrats in two districts. Arizona gets a new ninth district because of its population growth.

"The good news is, there are two rural districts, which will give rural Arizona more clout," Bell said of the map.

The two Democrats and one Independent on the commission voted in favor of the map on Monday, three days after it was created. One Republican opposed it while the other abstained, citing a lack of time to analyze it.

Gosar's new communications director Apryl Marie Fogel said the Republican freshman has no comment on the draft map. He's been busy working on the Hill, she said.

Democrat Ann Kirkpatrick of Flagstaff, who is trying to get back the CD1 seat after Gosar beat her last year, also had no comment, her spokesman Derek Frome said.

"We are watching the process closely... but really decided not to comment on any draft proposals until the final map is approved by the Department of Justice," Frome said, explaining it's "out of respect for the process."

The commission expects to release a draft map of legislative districts later this week, then conduct another round of public hearings on the maps before finalizing them.

The public has the rest of the month to comment on the proposed maps, and people who can't get to the meetings can go online to azredistricting.org.