Legislature takes discretion out of judges' hands, gives it to prosecutors 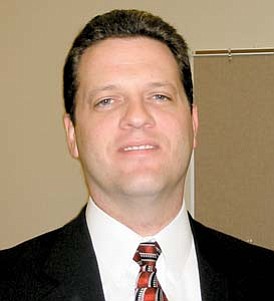 State lawmakers, in an effort to get tough on crime, have enacted laws that take power away from judges and hand it instead to prosecutors, said one law expert, and that has increased the number of plea bargains, cut back on jury trials, and may have created unfair sentences.

In 1978, Arizona's Legislature enacted tougher sentencing laws. The most obvious change was a move toward "presumptive" sentences. That means, for a given kind of offense, a judge has a specified range of sentencing options; for a class 2 felony, for example, the judge can assess the presumptive sentence of five years, or as little as three years, up to 12.5 years - but the judge cannot sentence the defendant to less than three or more than 12.5 years.

That's how it needs to be, said Chief Deputy Yavapai County Attorney Dennis McGrane. The authority has been given to the prosecutors by the Legislature.

"You can see it today in states where they allow judges a lot of discretion: Judges sometimes get it horribly wrong," McGrane said.

The Legislature was prompted to act by judges who wouldn't, said McGrane. He gave the example of a DUI. "It's a misdemeanor; the basic minimum punishment is 24 hours in jail.

"When I was a young prosecutor, that was exactly what judges would give as a conviction: 24 hours in jail. It didn't matter if you were the best, cleanest defendant and had cooperated with the police, or you were the worst, you'd been weaving all over the road and were abusive with police - you'd get the same punishment," he continued.

"The laws would be unnecessary if the judges had used their discretion," McGrane concluded.

There also are certain crimes for which a defendant found guilty must be sent to prison; the judge has no choice.

"So, in this example, the prosecutor effectively controls the sentence by charging the number of images," he said.

A man named Morton Berger was convicted in Maricopa County in 2006 of having 20 child-porn images and was sentenced to 20 consecutive 10-year terms, or 200 years, without possibility of parole. That was the minimum sentence the judge could impose; the maximum would have been 480 years. By way of comparison, a person convicted of second-degree murder in Arizona faces a maximum sentence of 22 years.

And juries usually don't know the penalties defendants face, said Popko. "When you go back and tell them after the trial, they are shocked. They don't know the consequences of their verdict."

Defendants' fear of this kind of situation has driven the number of jury trials down. There are far more cases settled by plea agreements than trials. "All the stats show that," said Popko. "Trials are going down."

In Yavapai County, this has created what some defense attorneys call a culture of overcharging at the County Attorney's Office.

One attorney, who declined to be identified for this article, said, "This county overcharges, then offers a plea like you're getting a break. That's unethical."

"I think that comment is unjustified," McGrane said. "It is not our goal to charge defendants with charges we can't support."

"Not taking (the deal) will harm you worse than admitting to a crime you didn't commit," the anonymous attorney said.

Popko said increasing charges is common. "The prosecutor can say, "If you take the plea now, and we don't have to go to trial, we'll charge you with' - for example - "misconduct with a weapon, and we'll stipulate to probation. Or if you go to trial we will charge the max of all the possible charges.'"

McGrane said the YCAO doesn't do that: "We can't punish them for going to trial." He said new, harsher charges do sometimes surface before a trial, in a small number of cases, but only when new information is discovered that warrants new charges.

"Are (pleas) a substitute for trial? Absolutely. If we took every case to trial, it would be an incredible burden to the taxpayers," he added, pointing out that the current criminal justice system is at about its maximum capacity now.

McGrane maintains the YCAO actually keeps as much power in the judges' hands as possible by doing what he calls "charge bargaining." That means the County Attorney tells defendants they can take or leave an offer of certain counts against them, but doesn't agree to a specific sentence; the judge decides that, for the most part, and within the boundaries of the minimum sentencing laws.

All of these plea bargains have increased the overcrowding in state prisons. "(The plea bargains) overload the system because we want new crimes and harsher punishments," Popko said. "But we don't beef up the system to keep up with the volume."

Arizona's population doubled between 1979 and 2010, but the number in prison jumped nearly 12 times, from 3,377 to 40,477 during those same years, according to a report by the Arizona Auditor General. That's about one in 170 Arizonans in prison. It costs the state nearly a billion dollars a year to house these inmates, the report said.

That doesn't bother McGrane. "You put bad people in prison and crime goes down," he said. "There is a direct correlation."

"Some people say the prisons are a costly measure. But one has to measure that against the cost of putting these people back on the street. It is $1 borne by taxpayers or $2 borne by victims," McGrane said.

The bottom line, said Popko, is constitutional protections "are all literally true, but how it works out in the courtroom is different. The system is stacked against you."