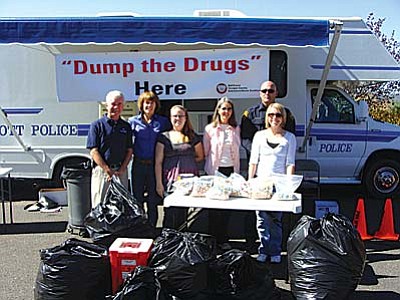 A Dump the Drugs event will be held Oct. 29 in Sedona, Cottonwood and Camp Verde.

MATFORCE is helping sponsor the event as part of their "Prescription Drug Abuse: Who's Counting?" campaign.

Counting the numbers of deaths is alarming as drug overdose is now the second leading cause of accidental death in the United States.  Prescription pain killers result in more accidental drug overdoses than cocaine and heroin combined.

Over the past three years, MATFORCE's bi-annual Dump the Drugs events have collected and counted 5,000 pounds of unwanted medication.

Sheila Polk, Yavapai County Attorney and MATFORCE Co-Chair, said, "One out of every four 10th and 12th grade students in our county has reported abusing prescription pain killers.  It is especially important for parents and caregivers to safeguard their medications.  Proper disposal not only keeps the drugs out of the hands of teens, but it gives a strong message to our youth about the danger of misuse."

All too often a story is heard about a young adult taking pain killers and mixing them with alcohol.  Without understanding why, the youth gets sleepy, falls asleep and never wakes up. The drugs, especially mixed with alcohol, can slow the respiratory system down until it stops completely.

Polk said, "Sadly, we have counted eight similar stories in our County during this past year.  MATFORCE's Prescription Drug Abuse Campaign 'Who's Counting?' hopes that we can count on all citizens to bring unwanted medication for safe disposal."

MATFORCE encourages everyone to look through your medicine cabinet for expired or unwanted medication and bring it to one of the drop-off locations.  For more information call 928-708-0100 or visit the MATFORCE website at matforce.org.