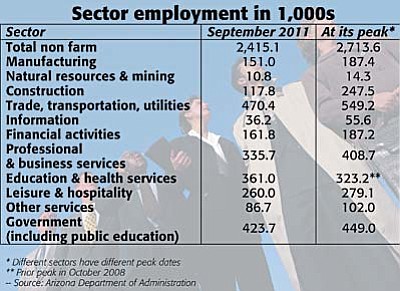 The state added 26,100 jobs between August and September. While most of those were in public education -- people who normally go back to work this time of the year -- private sector employment also was up by 4,100.

That's the first month-over-month gain for a September in private employment since 2006.

Aruna Murthy, director of economic analysis for the state Department of Administration, said there were unusually strong showings in several sectors of the economy. Even the state's construction industry, where employment remains just half of what it was at its June 2006 peak, managed to add 3,700 jobs in September.

There also were big jumps in the number of people working in retail trade and at bars and restaurants.

Some sectors of the economy continue to languish, including employment in financial activities and professional and business services. But Murthy said it appears that the Arizona economy is recovering faster than much of the rest of the nation.

"I am quite actually happy looking at the over-the-year numbers,' she said.

For example, she noted that Arizona's employment in the leisure and hospitality industry is 4.3 percent higher now than it was a year earlier. The national growth rate is 1.4 percent.

The health care sector grew by 5.4 percent, versus 2.5 percent nationally. And the number of people working in manufacturing is up by 2.9 percent annually, against a 1.6 percent nationwide figure.

Even the retail sector, a key indication of consumer confidence and consumer spending, grew by 1.6 percent, three-tenths of a point higher than the rest of the nation.

Overall, there are 51,600 more people working in Arizona now than a year earlier, a 2.2 percent increase.

Murthy said there are other indications the economy is improving, including a decline in first-time jobless claims. But Murthy said it's harder to say whether the long-term unemployed -- those whose benefits already have expired -- are having any better luck in getting jobs.