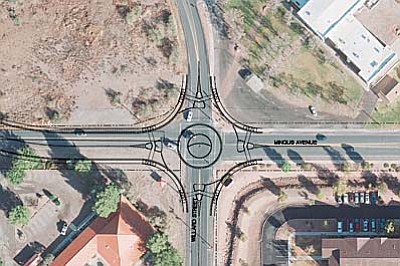 COTTONWOOD -- It takes land to build a wider road and a roundabout. Cottonwood has begun to add rights of way at the southwest corner of Mingus Avenue and Willard Street. It's the first of a series of similar purchases to update the busy road and intersection, according to Development Services Manager Dan Lueder.

The Seventh Day Adventist Church will be paid $9,127 for its rights of way, drainage easement, plus compensation for an existing monument sign that will be taken..

The narrow section of West Mingus Avenue that snaked though the former historic Clemenceau District will be widened to three lanes to match the existing section north of Willard.

In addition, a roundabout will be placed at the intersection of Willard and Mingus, which otherwise would need a signalized traffic signal.